My brother Abe, some friends of ours, and I like to do at least one adventure per year. This year ended up including Tyler and Chris. The idea of doing the Outer Mountain Loop inspired the destination of Big Bend. But after doing some research, we realized that since you can’t reserve sites in advance at Big Bend - for some unknown reason - we’d have to just show up and be flexible. Also, we called and spoke to a park ranger. He thought that it would be a bad idea to do the loop and that we should stay in the Chisos Mountains. Spoiler alert: he was right. So, the plan was simple: show up with enough food and water for 4 days and see what happens.

Speaking of food and water… Planning food for a backpackig trip is very different than planning water. Water is easy to plan. Take the number of days on the trail times 4 and you have the number of liters you’ll need. Carrying water - not so easy.

Food, as you can see above, takes a little more planning. I recently learned about bringing olive oil to add to my freeze dried meals. I must say, it is quite nice and a huge calorie per oz winner at 240. Also, GORP stands for “good old raisins and peanuts”. But, my GORP was actually pumpkin seeds, pestachios, cashews, peanuts, and pecans. 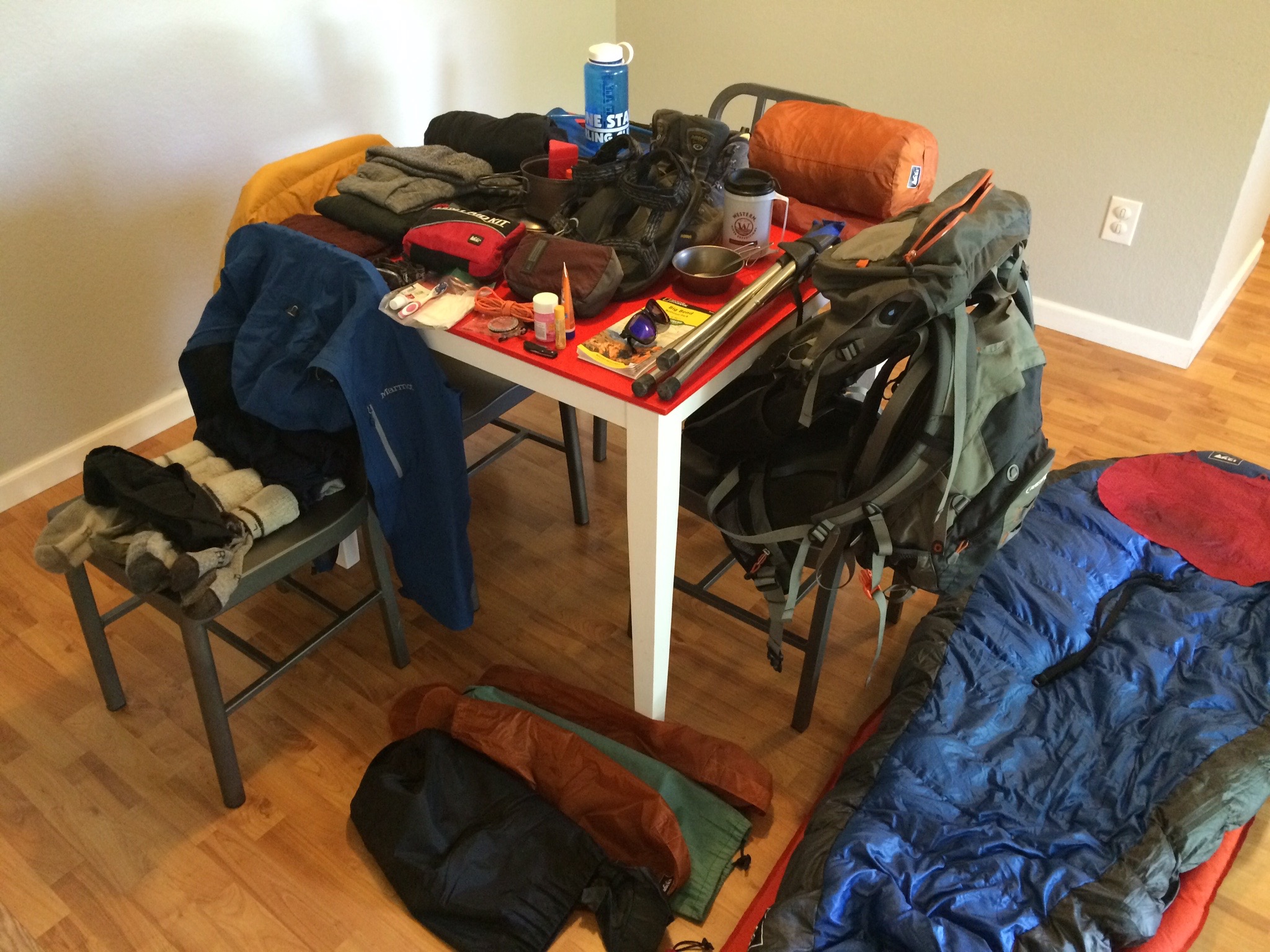 Day One - The Window

We hit the road at 4:30a. By the time the sun was up, we were already a little delirious. 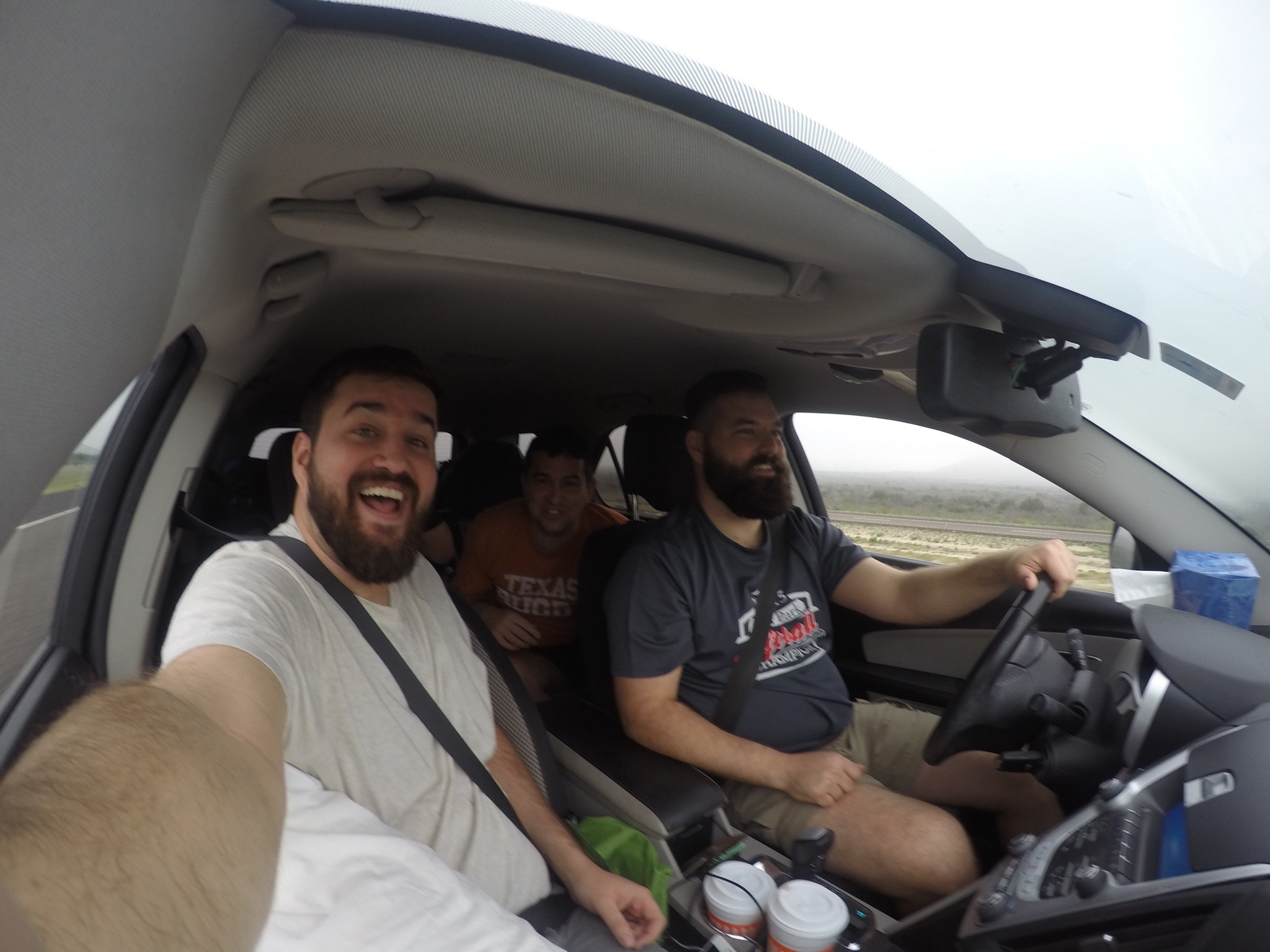 We got to the park and headed straight to Panther Junction to try to get our backcountry permit. It was 2p by this point, and we had to settle for a car camping site in the Chisos Basin. It could have been worse. 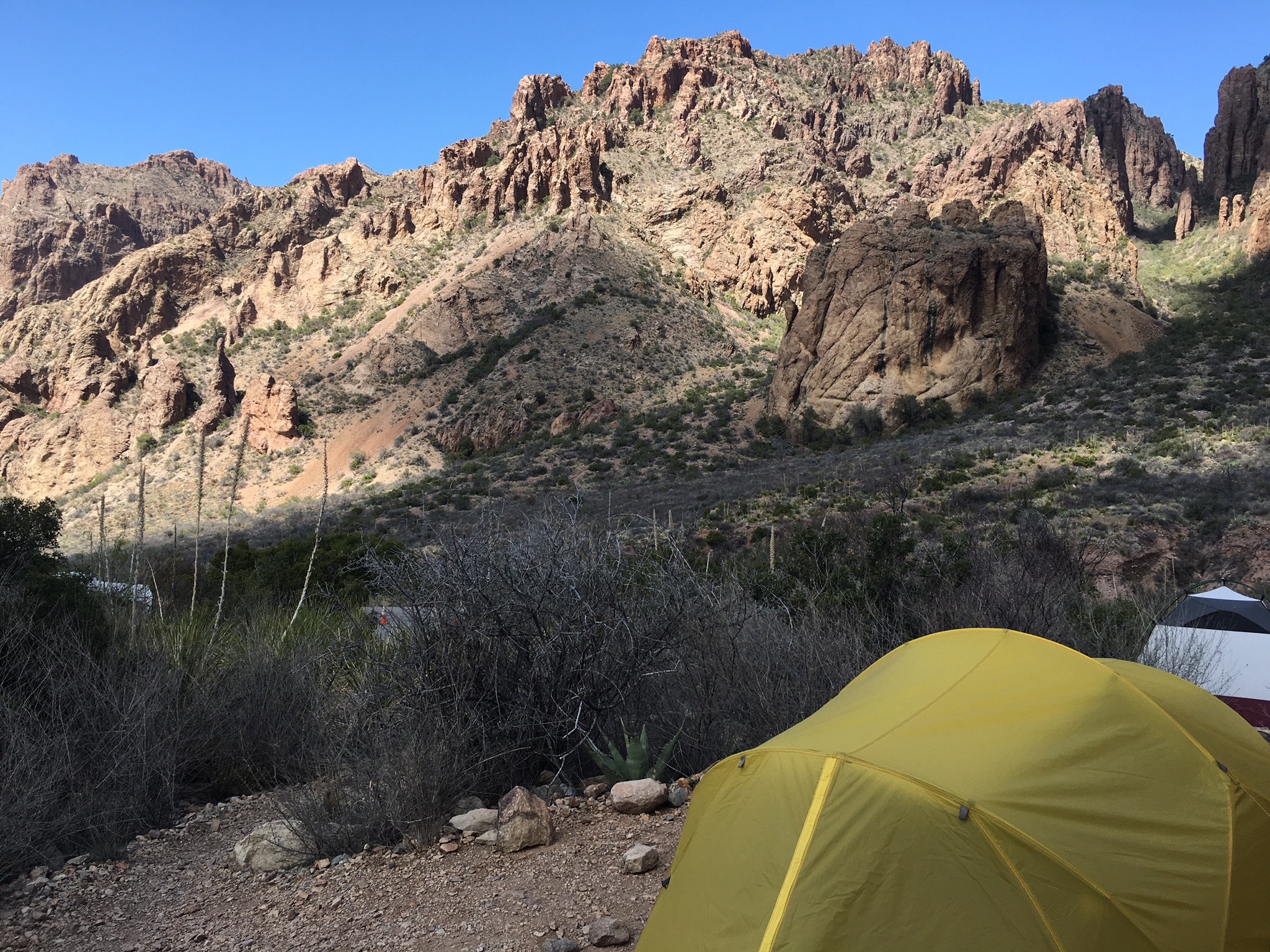 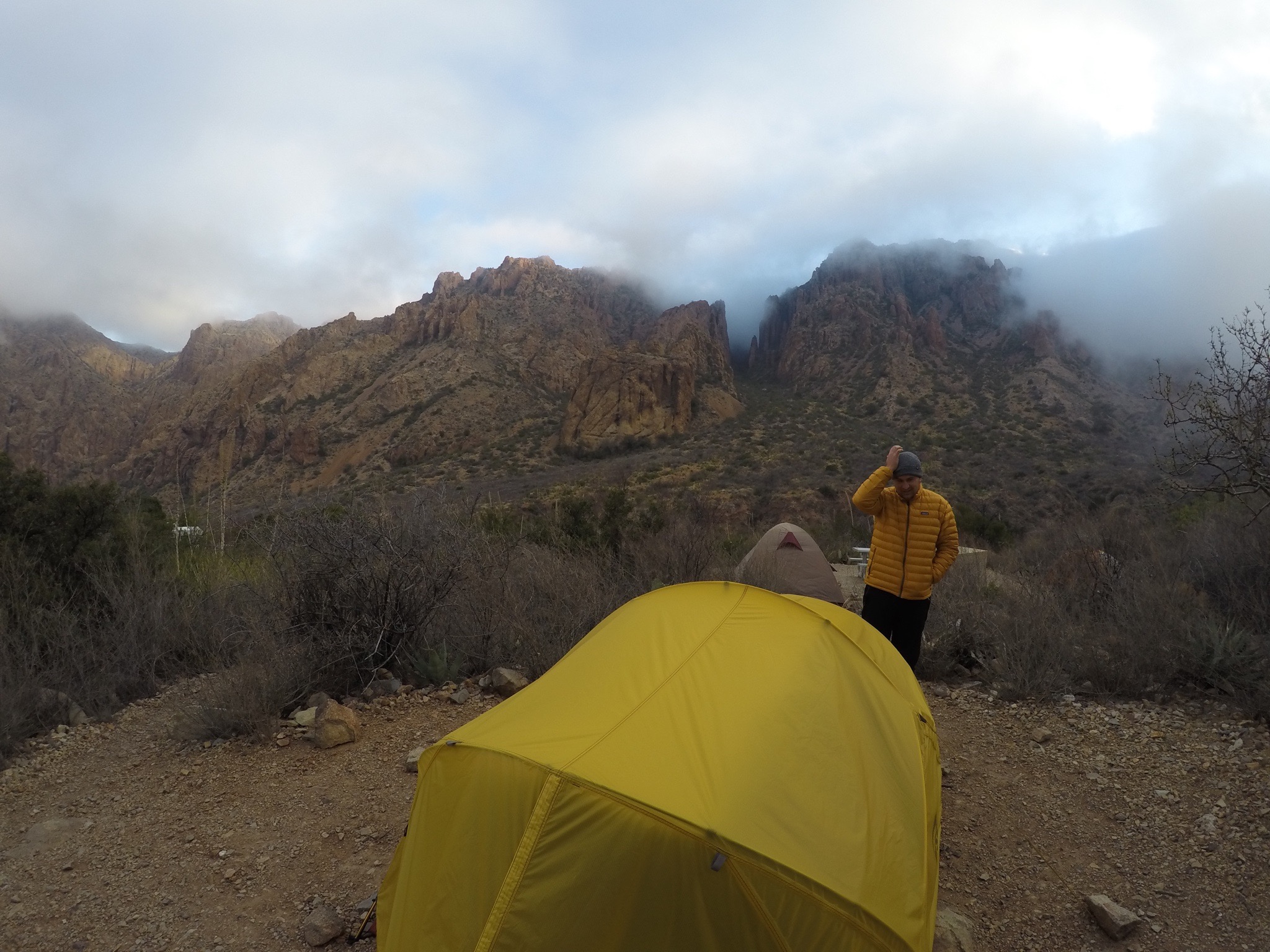 As you can see, the Chisos Basin is spectacular - in the afternoon or in the morning. After we set up camp, we hiked down the famous “Window Trail”. It is not a secluded trail. We saw many other hikers. But with a rumbling storm in the distance, it was quite the experience. The window itself is very interesting. The rock is worn extremely smooth and is very slick. My palms start to sweat just thinking about being in it. It seemed that at any moment I might start a slide that would end in a 200 foot fall. But, it also seemed like a good spot to have a snack - just not too close to the edge. 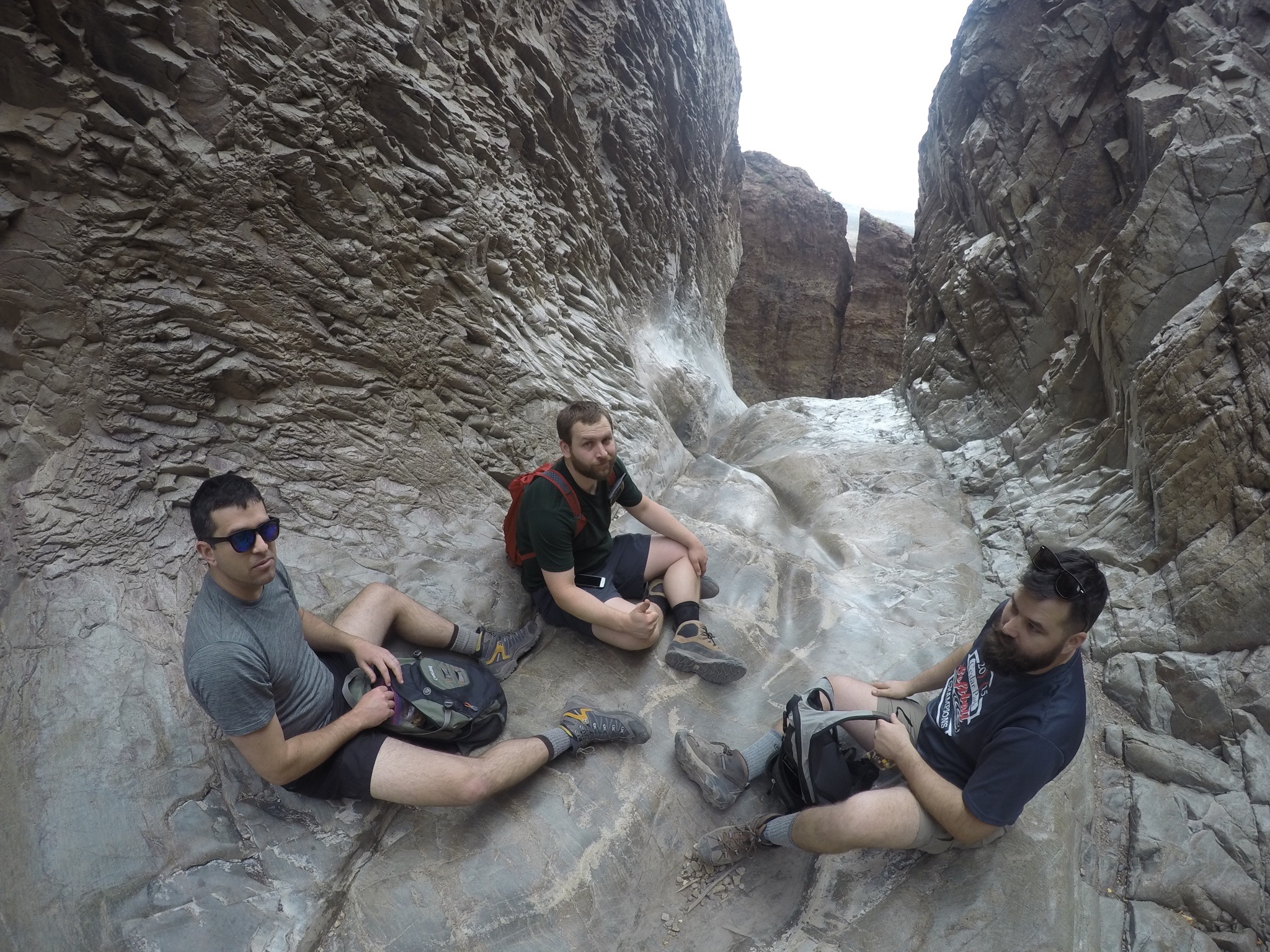 Then we headed back to camp. We got about 5 minutes of sparse but heavy rain drops as a cold front came through while we made dinner. But other than that, the front only brought cooler weather and a night of wind.

We woke up with the sun the next morning, quickly climbed into the car and scooted over to Panther Junction to be the first campers in line for backcountry permits. It was worth it. After startling the nice park ranger when she unlocked the door to open for business, we were able to score primitive sites for the next two nights, the second night being on the South Rim. So, we drove back to camp to pack up and head to the trailhead. 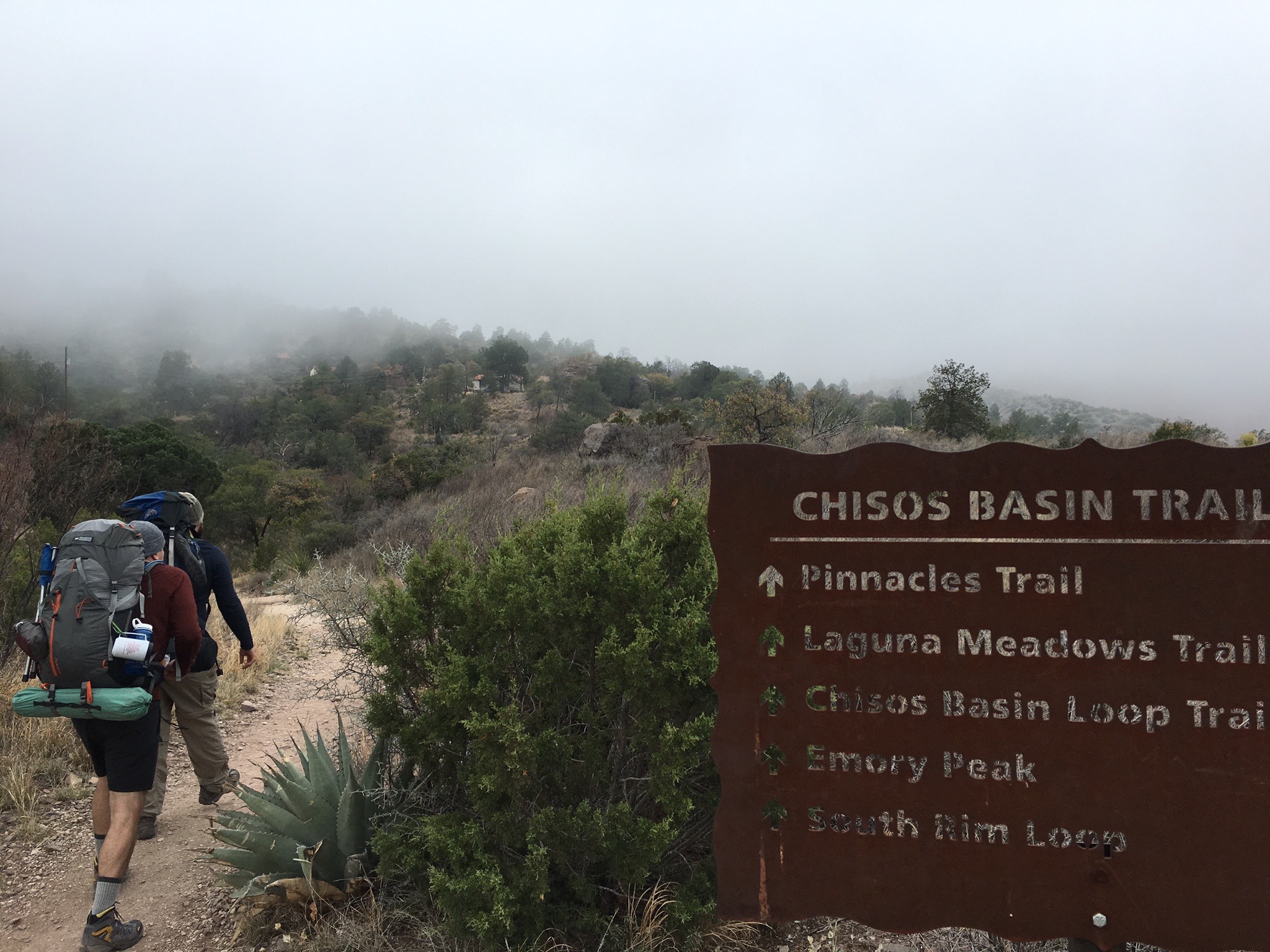 We started that cold, cloudy-morning hike on the Pinnacles Trail. We had to carry all of our water and our packs were heavy that day. Let’s just say it was a good day for a steep ascent. Really though, it was a climb, but nothing extraodinary. It was a short hike - up through the pass between Toll Mountain and Emory Peak - with many built-in breaks to stop and take a picture and/or admire a view. 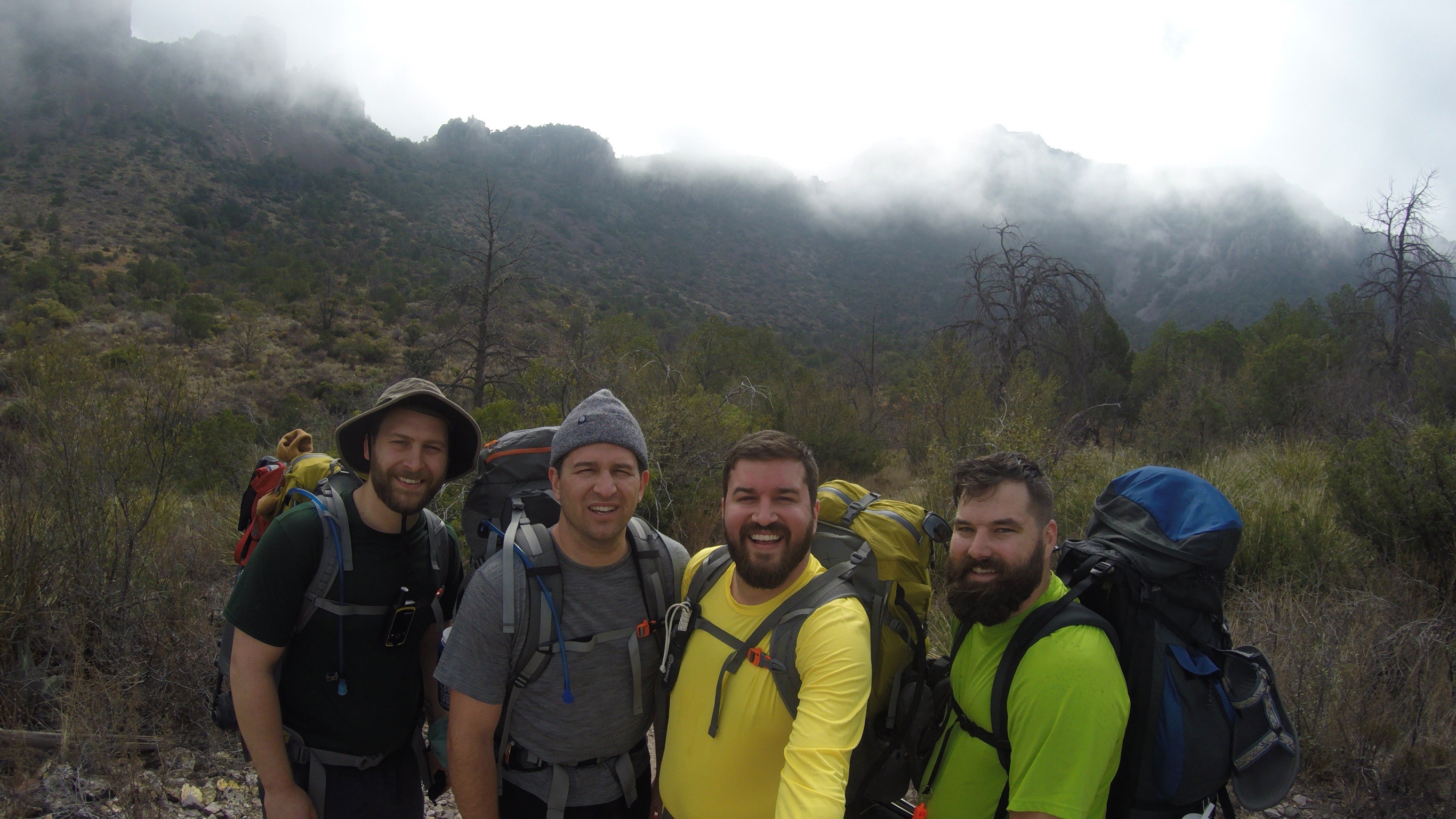 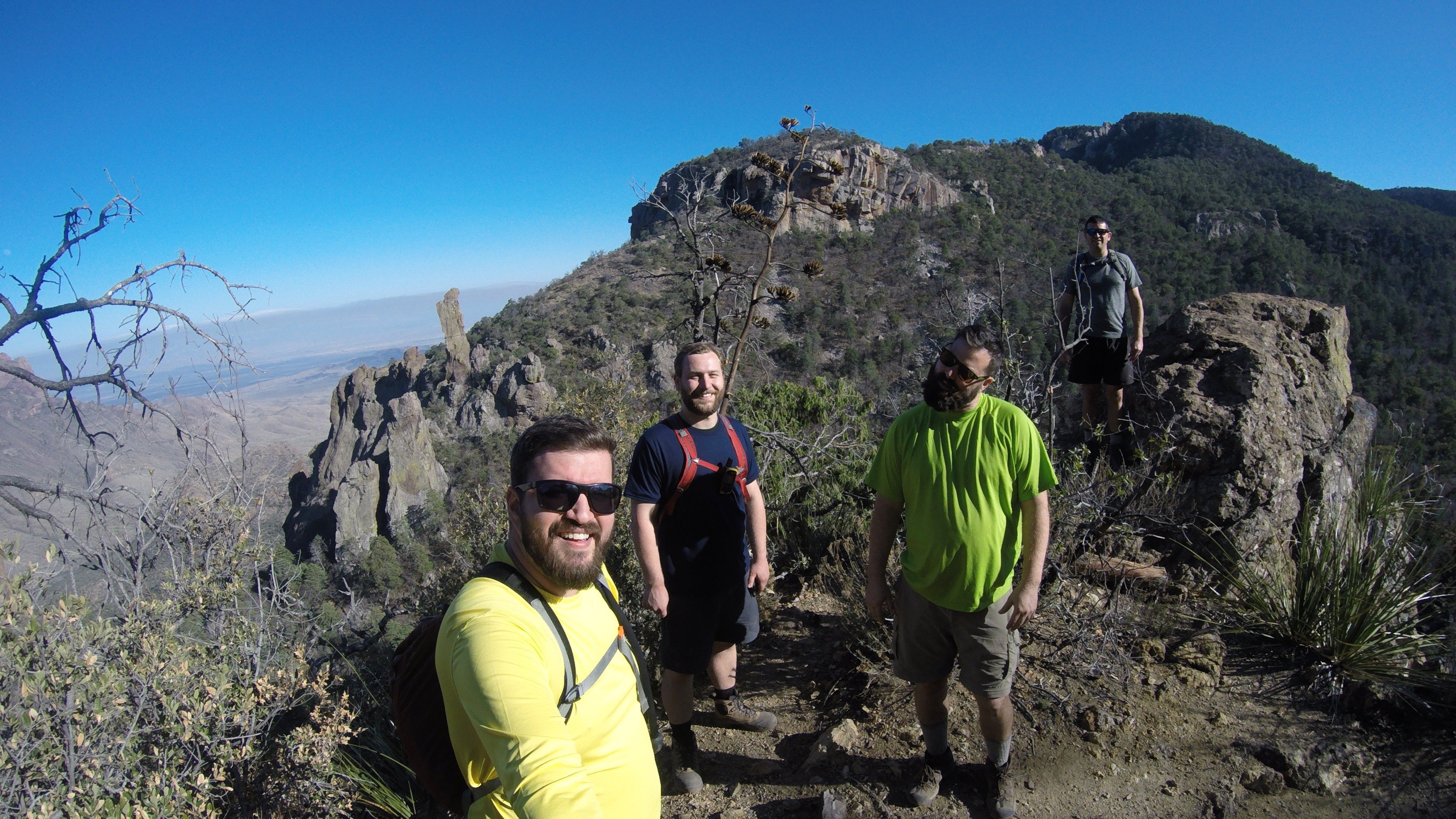 After the pass, we cruised down into Boot Canyon to our site - BC4. Here we made camp, grabbed a nap in the sunshine, ate some snacks, and tossed the disc. 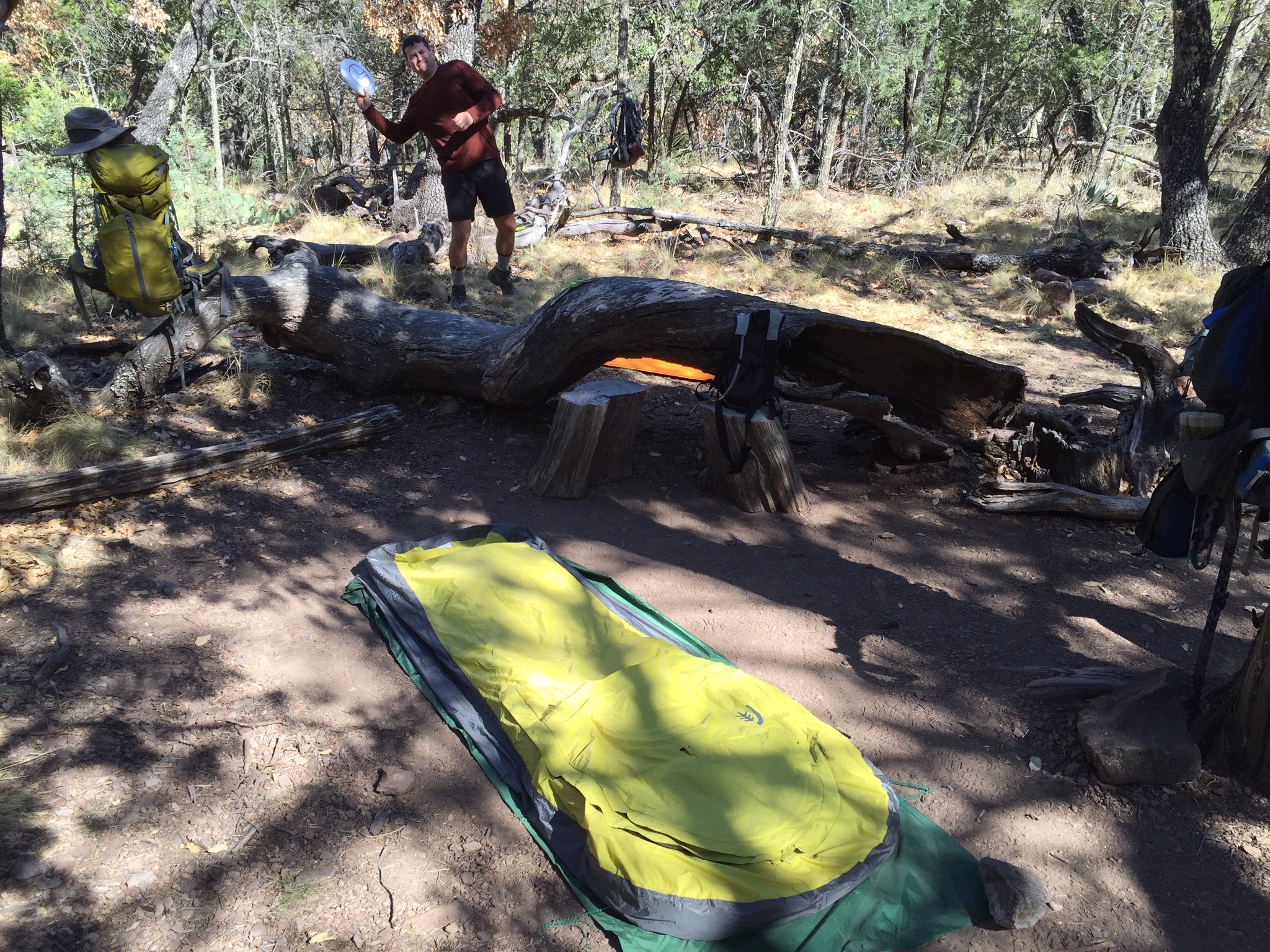 Refueled and rested, we grabbed our daypacks and headed back out of Boot Canyon and up Emory Peak. The trail goes almost all the way to the summit. There is a mild climb to get the last 50 ft or so to the top. Once on top, you can see beautiful desert mountains in every direction for miles. We had about 45 minutes to sunset, so we hunkered down to get some protection from the desert sun and wait it out with our new compadres. There were 7 others on top of EP (Emory Peak) with us as well as some radio antennas and what appeared to be a solar powered cellular antenna. 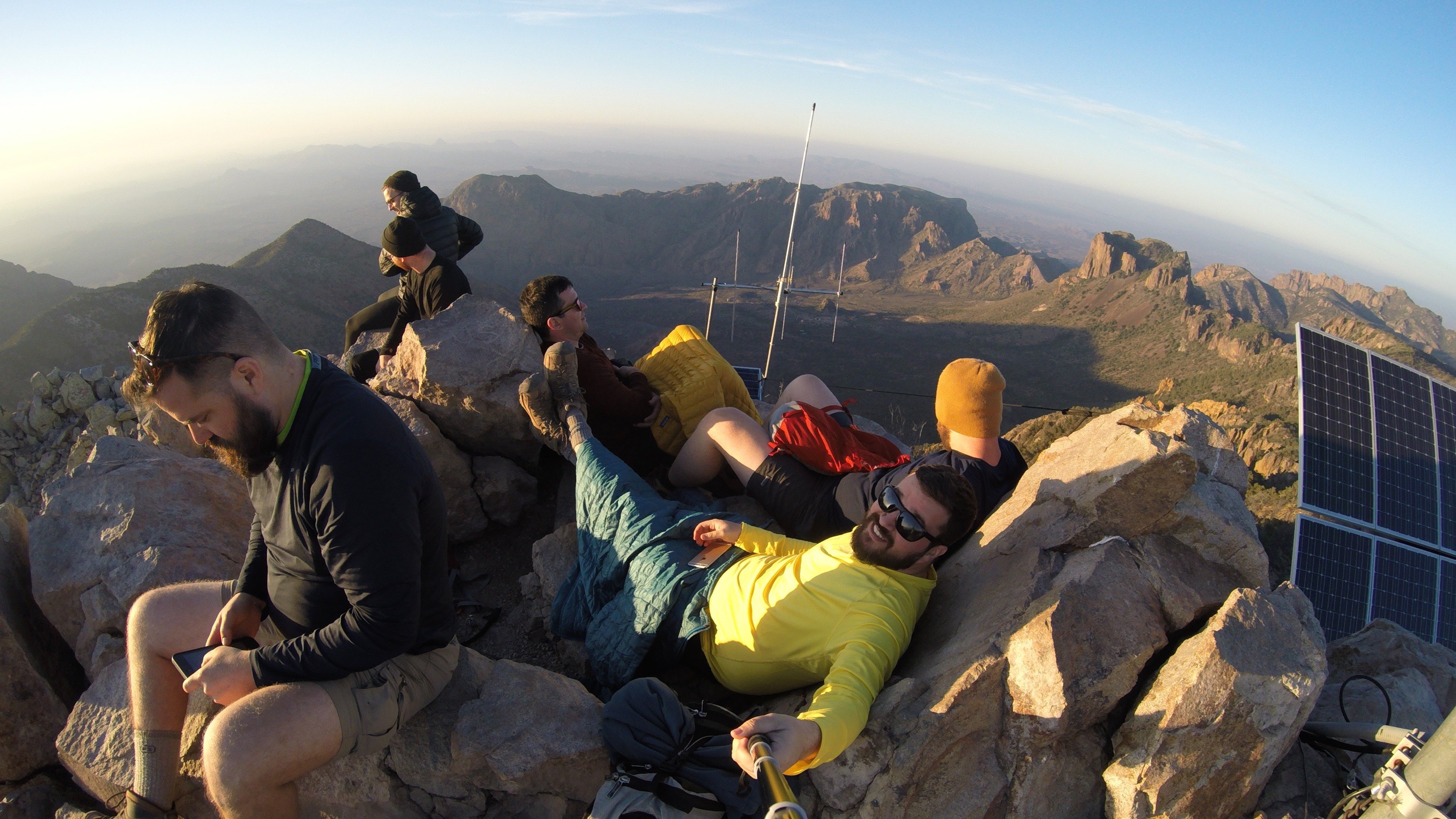 The sun set slowly as we soaked up the desert views and even caught a glimpse of the rare Colima Warbler while waiting out the sunset on the peak. 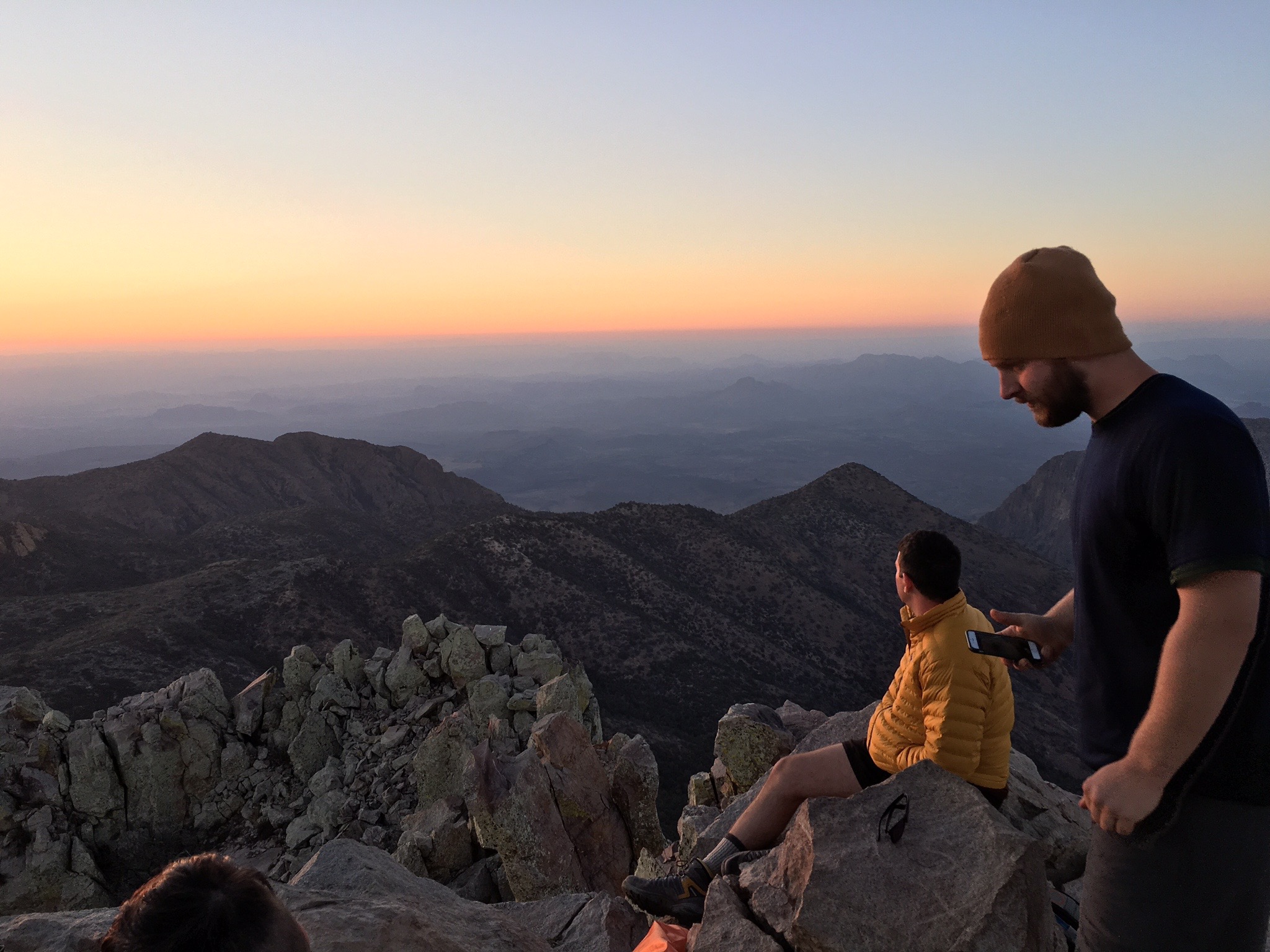 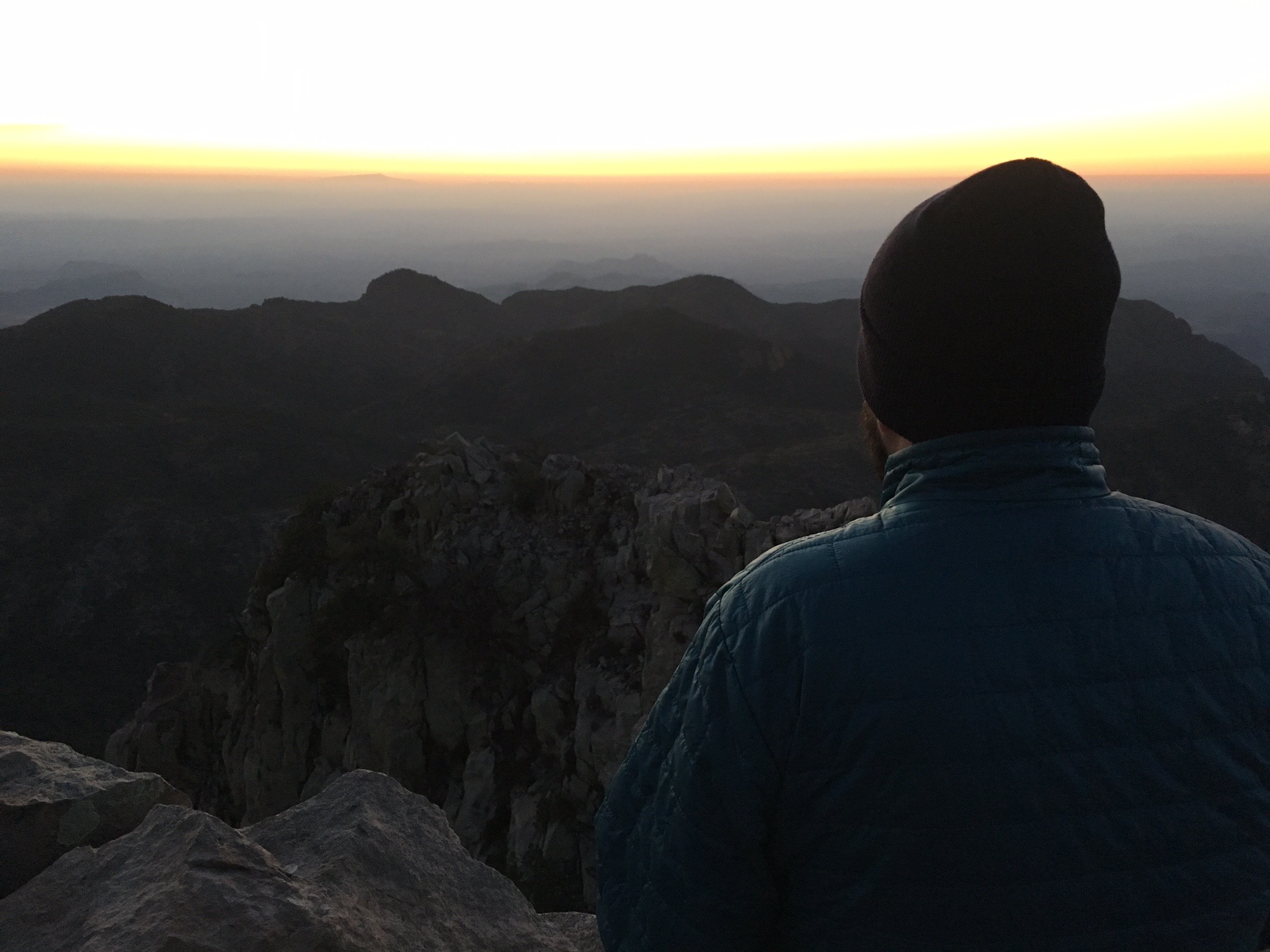 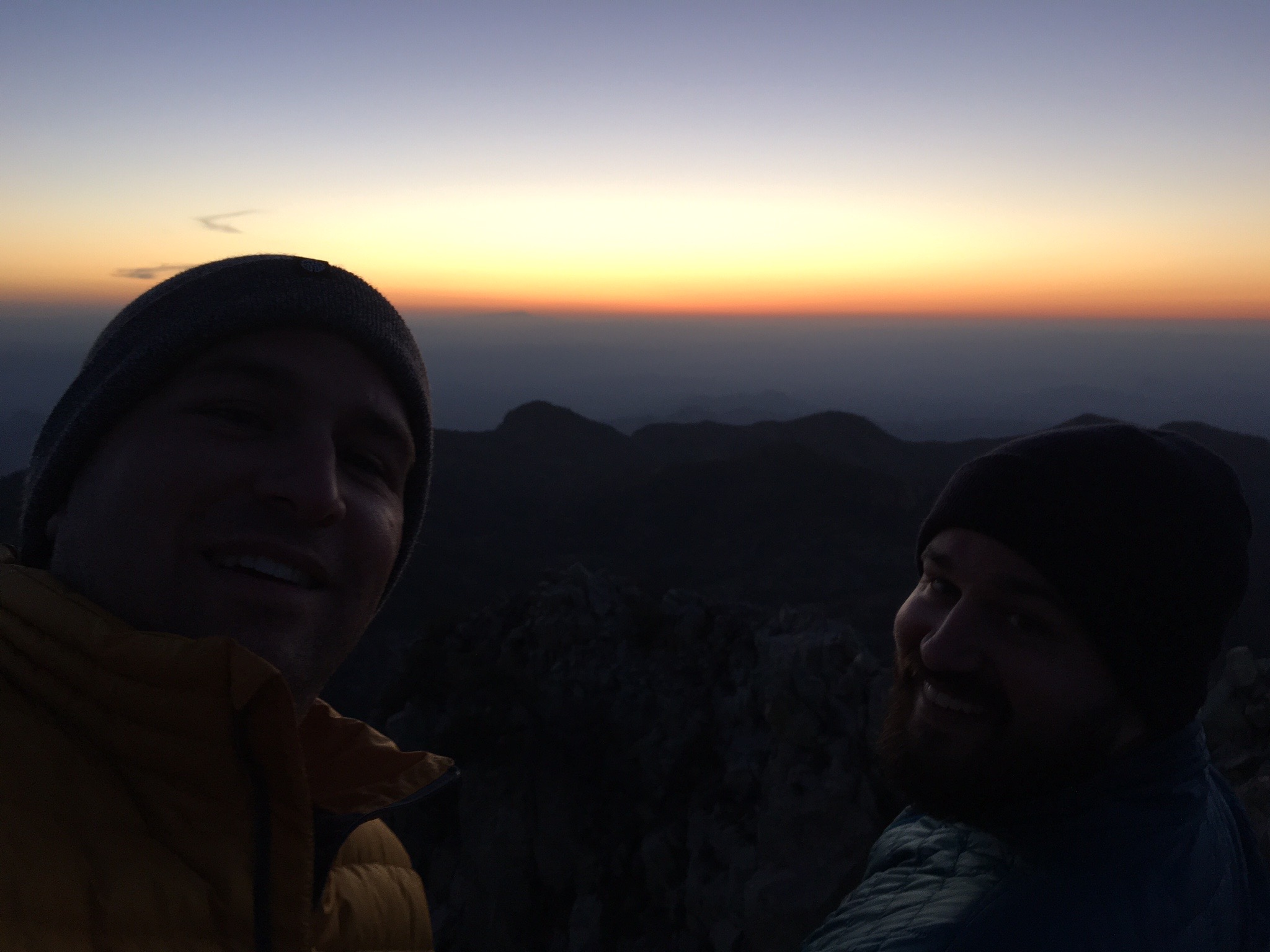 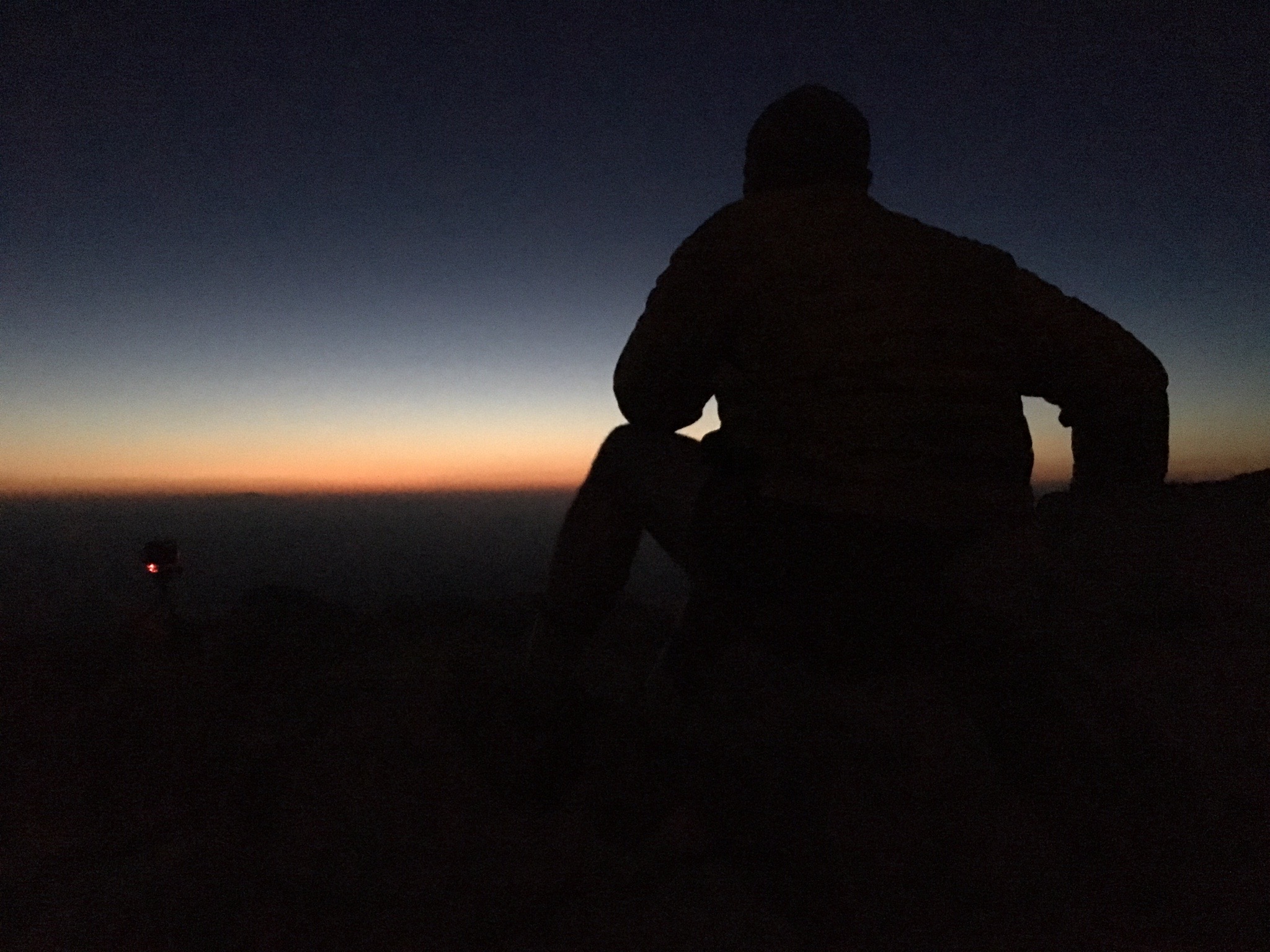 By the time the sun was down, most of our new friends had all headed back to their respective camps. The holdouts were the two fellas from the Great North West and our foursome. After the sun was down, Tyler and Chris headed back to camp to get some dinner and get ready for bed. Abe and I waited for some stars. We got a lot of moon. We were also visited by some creatues of the night. Our first guest on the summit was a little mouse. He was shortly followed by a ring-tailed cat.

Once dusk transitioned to night, Abe and I enjoyed the rare moonlit mountain descent and hike back to camp - headlamps present but not employed. We cruised down the mountain only occasionally breaking stride to navigate a shadowy portion of trail. Once back to camp, we rushed through dinner and hopped into our bags to get some sleep.

With a short hike upcoming, we slept in and relaxed in the morning. It was strange to wake up at 9am on a backpacking trip. The night before was clear and calm, so Tyler decided to sleep under the stars. 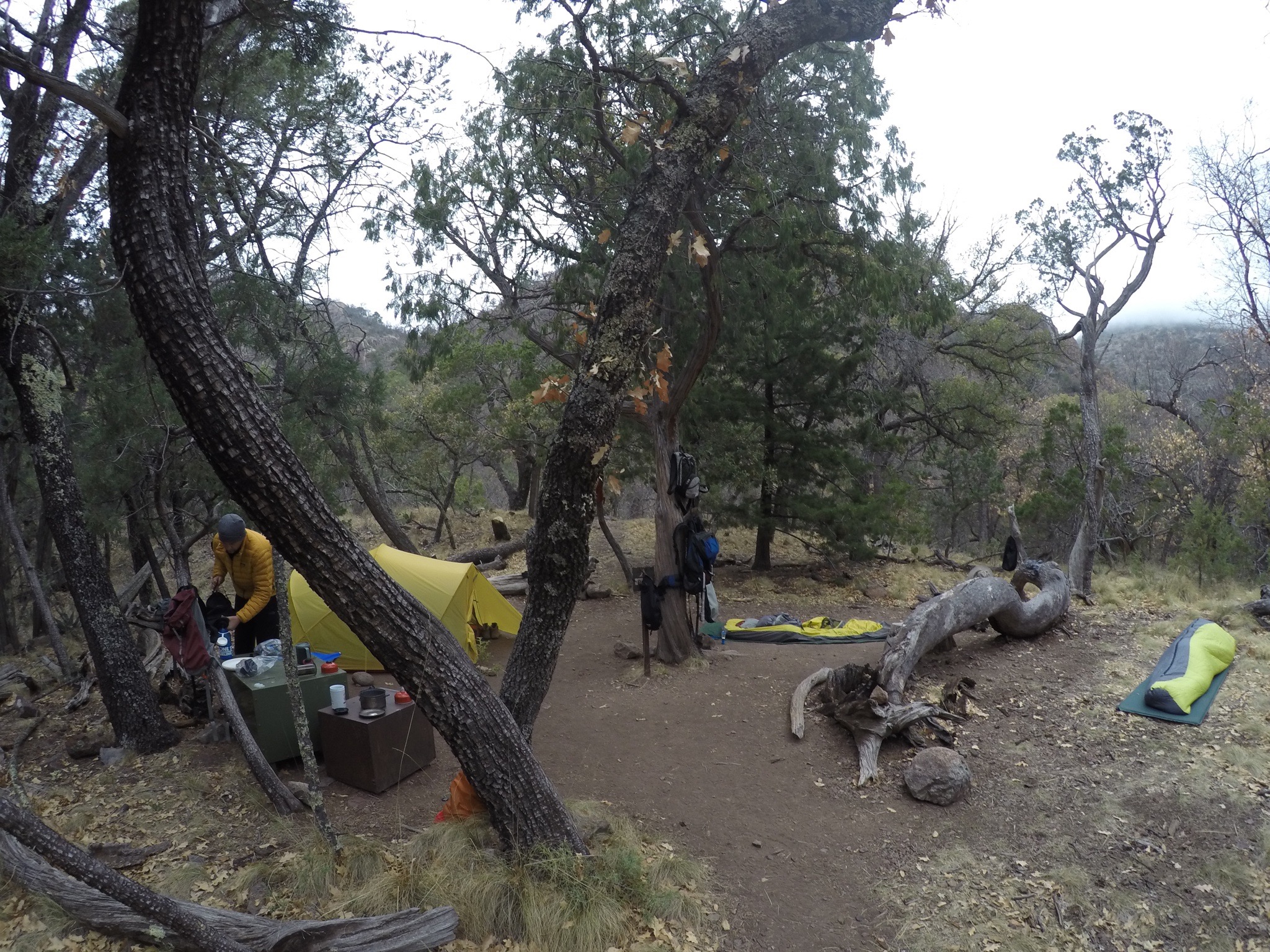 After a brief hike out of Boot Canyon, we made it to the South Rim trail. It is famous for a reason. 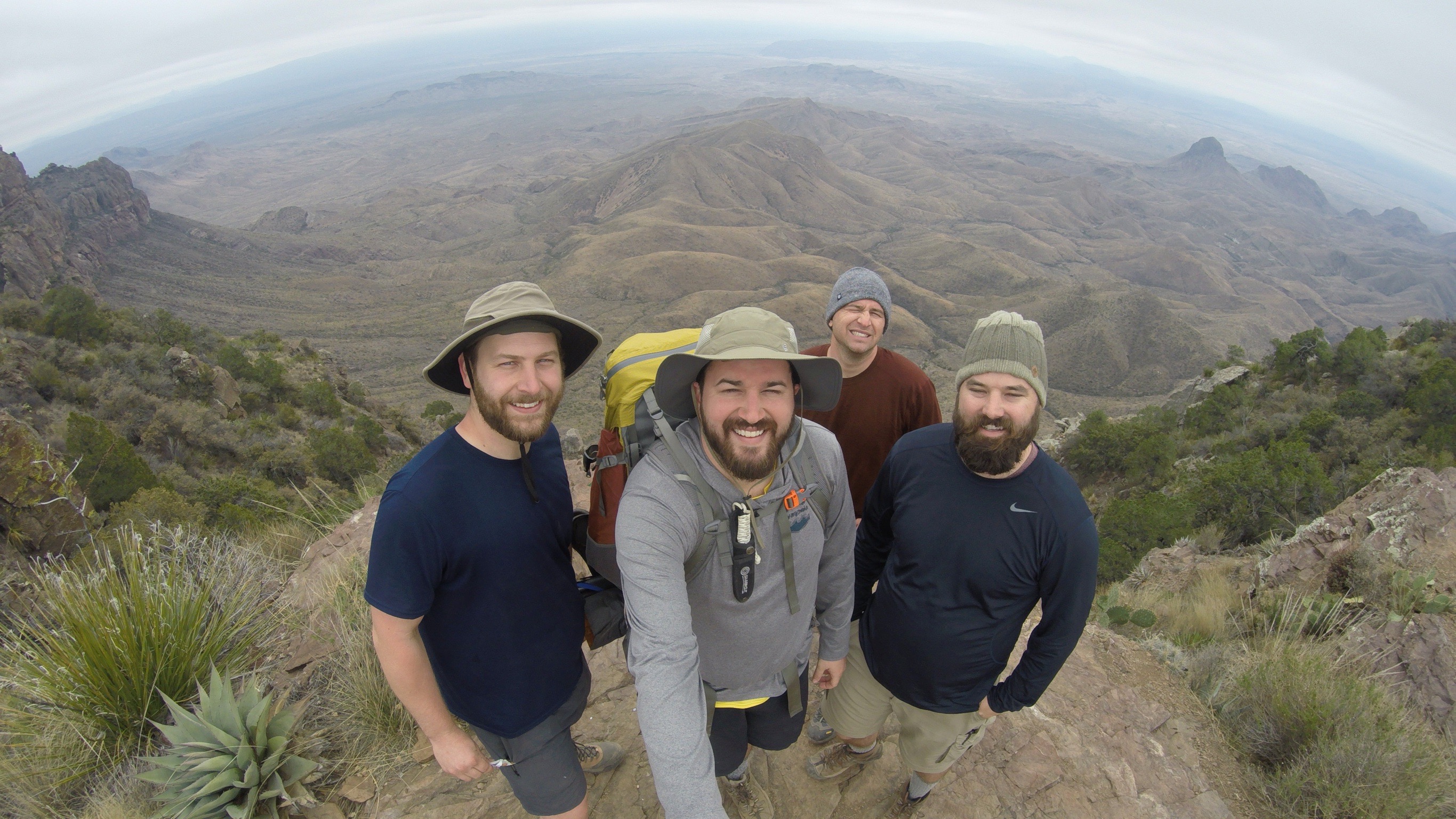 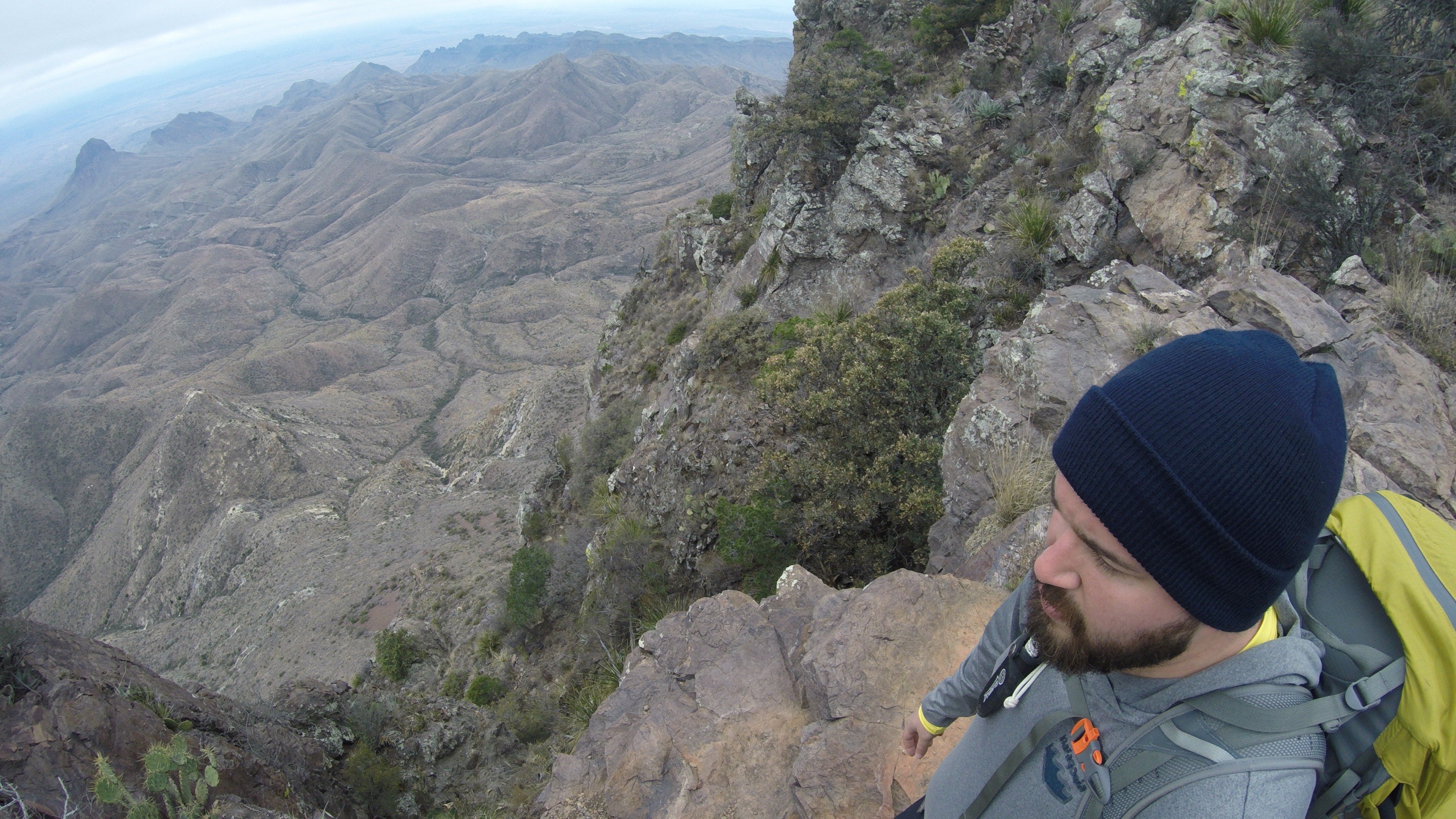 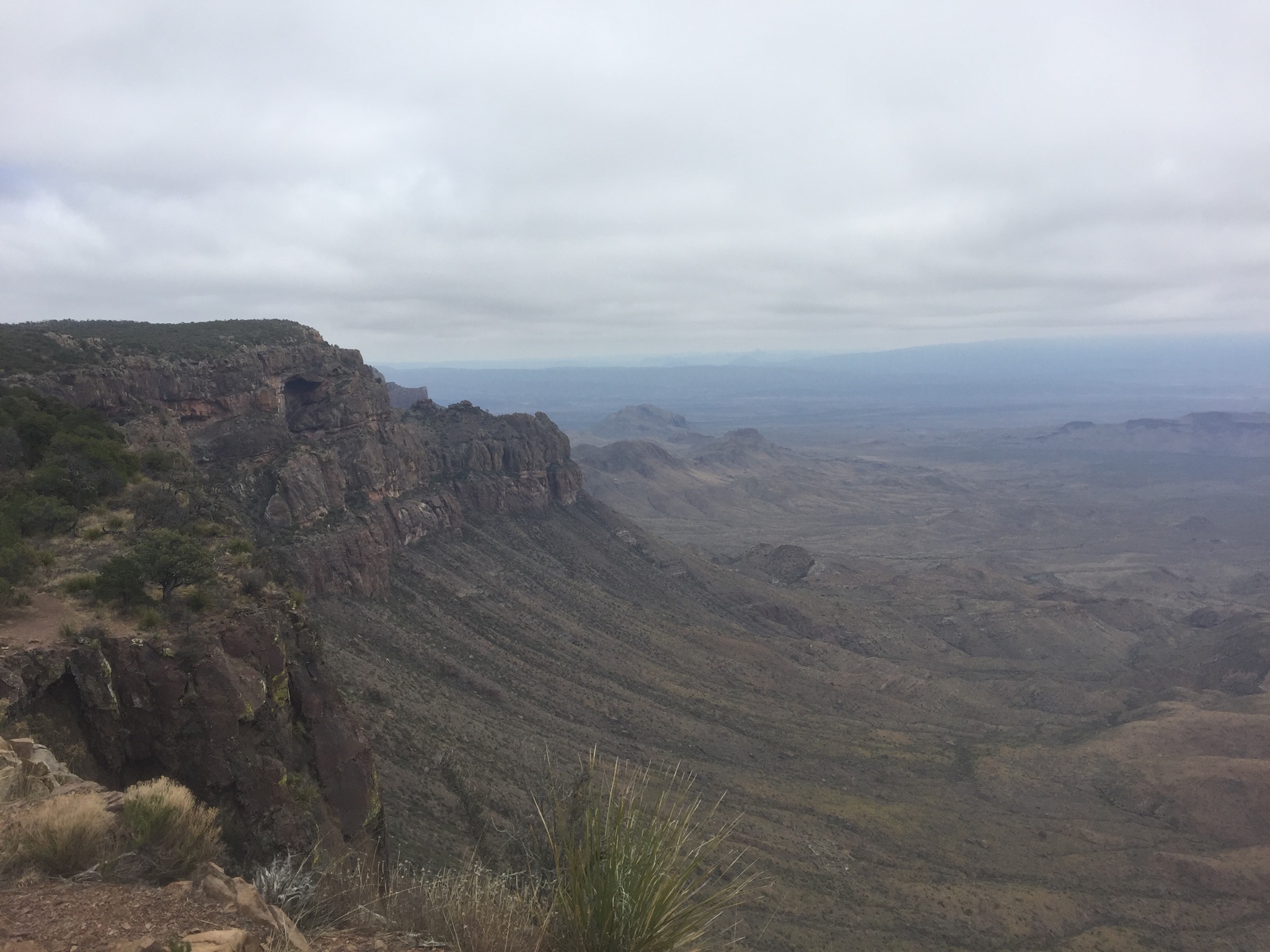 The sun started to burn through the clouds as we set up our final camp at site SW3. 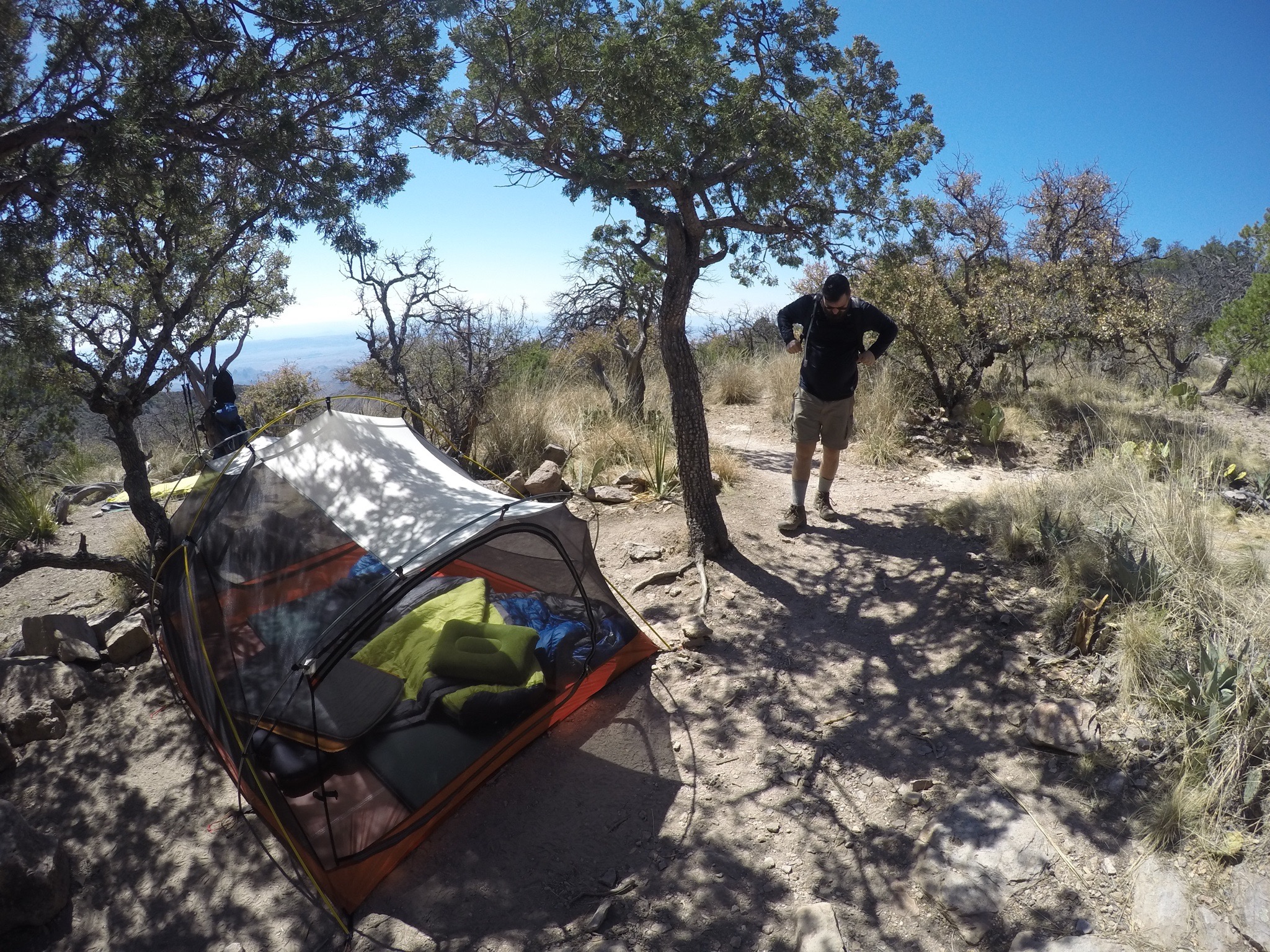 After resting, snacking, and tossing the disc a little, we decided to get in another day hike - the Colima trail. The sun was brutal - in our face out and back due to poor timing. Thankfully we did get some new looks at Emory Peak. Also, we were able to familiarize ourself with the part of the trail that we would start in the dark the next morning. Once back at camp, we went ahead and ate dinner so we could get to bed right after exploring the rim. 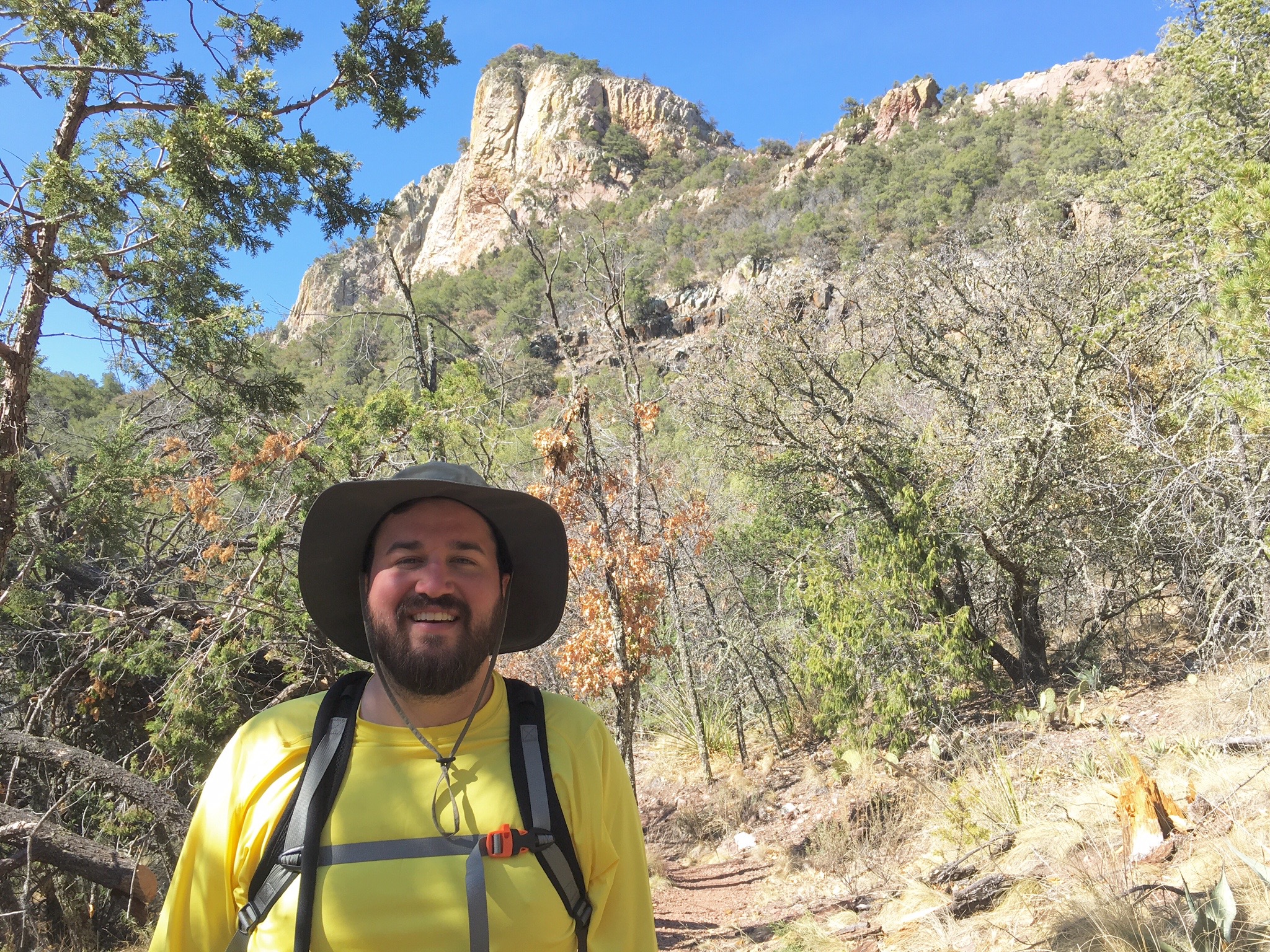 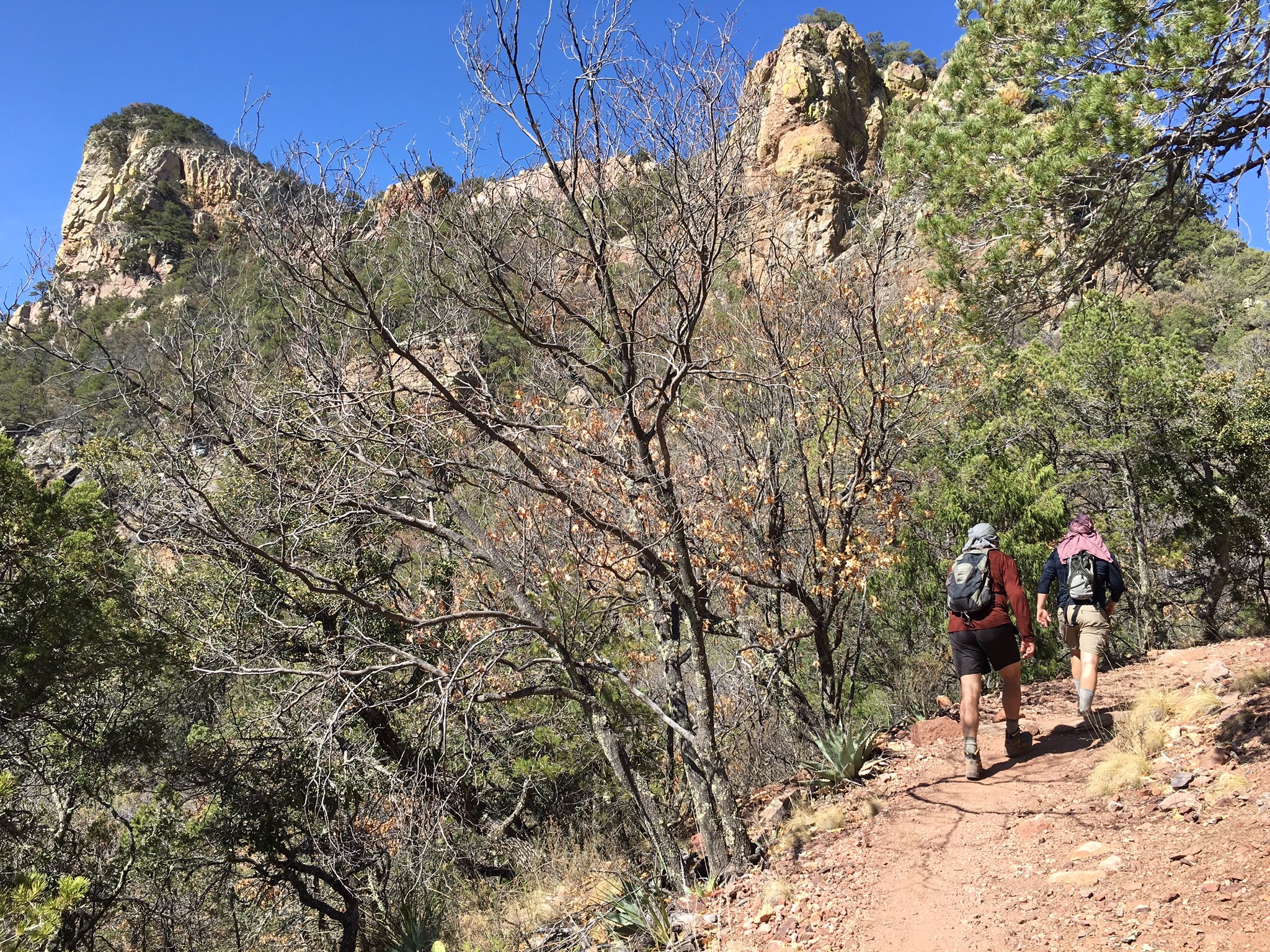 In hindsight, we should have skipped the Colima trail, gone straight back to the South Rim, and made dinner out there. Thankfully we did eventually make it back to the rim about an hour before sunset. We took most of that hour to slowly explore the ledges and take in the vews. Once we found a good spot, we settled in for another epic sunset. 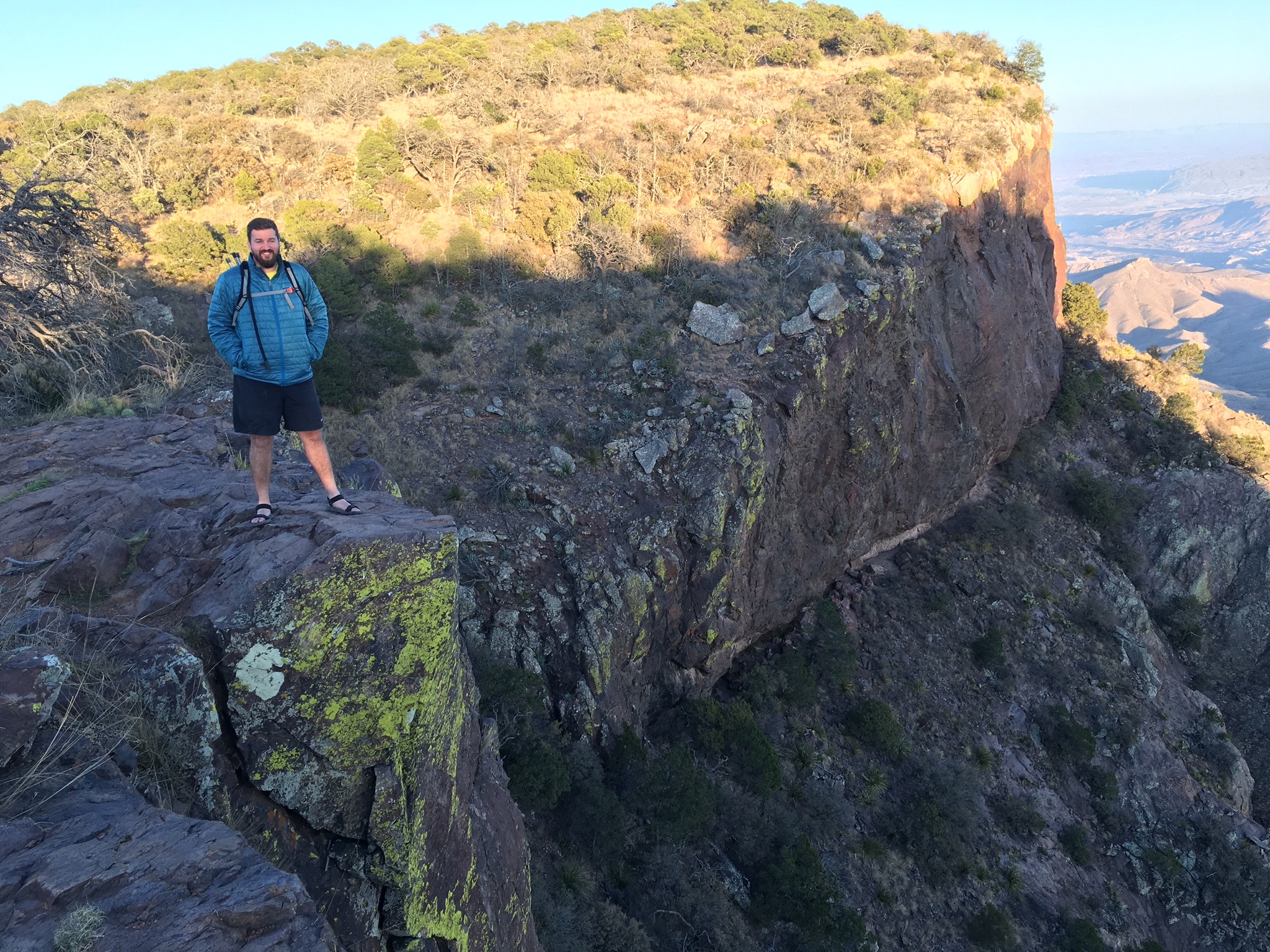 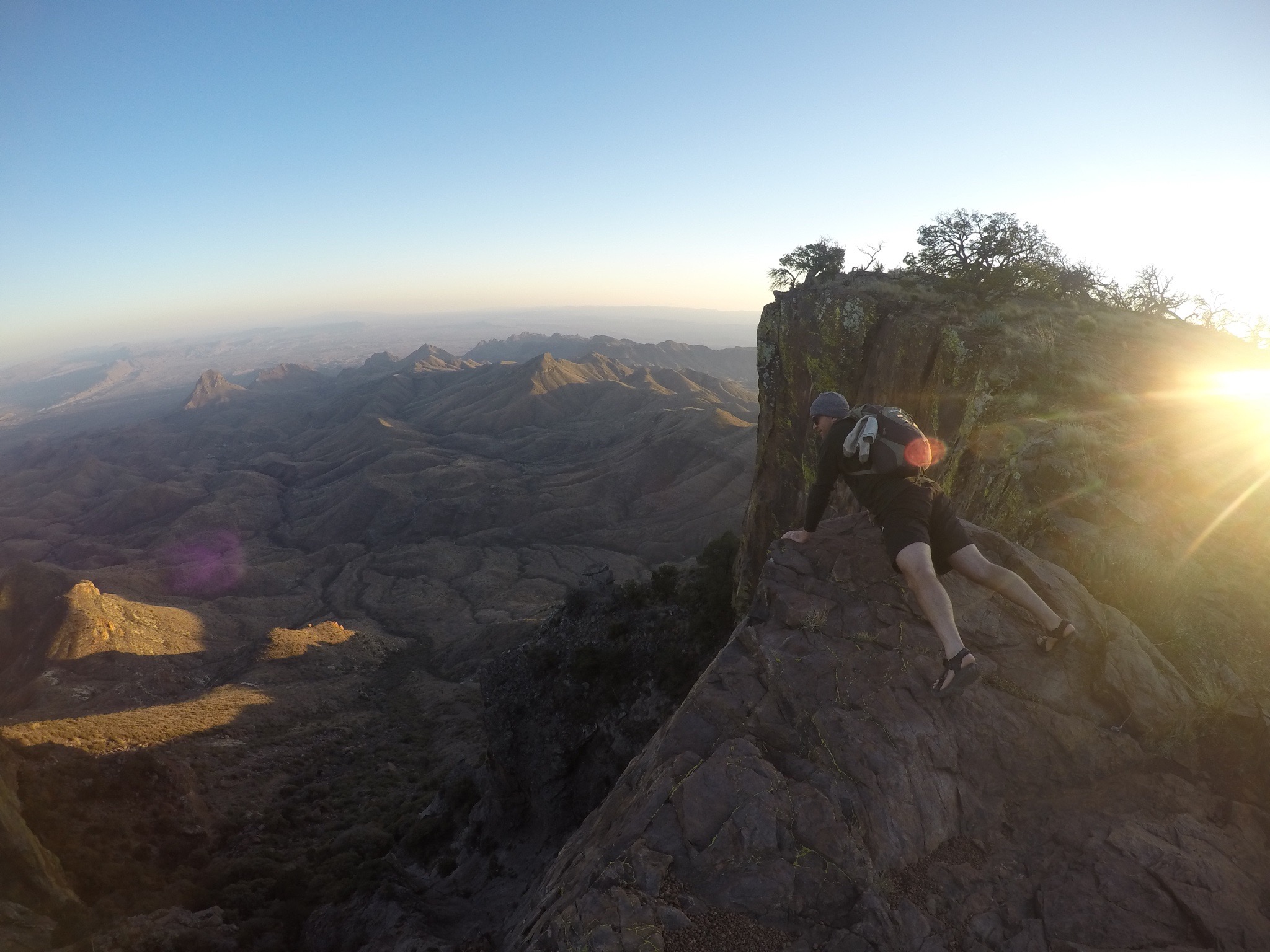 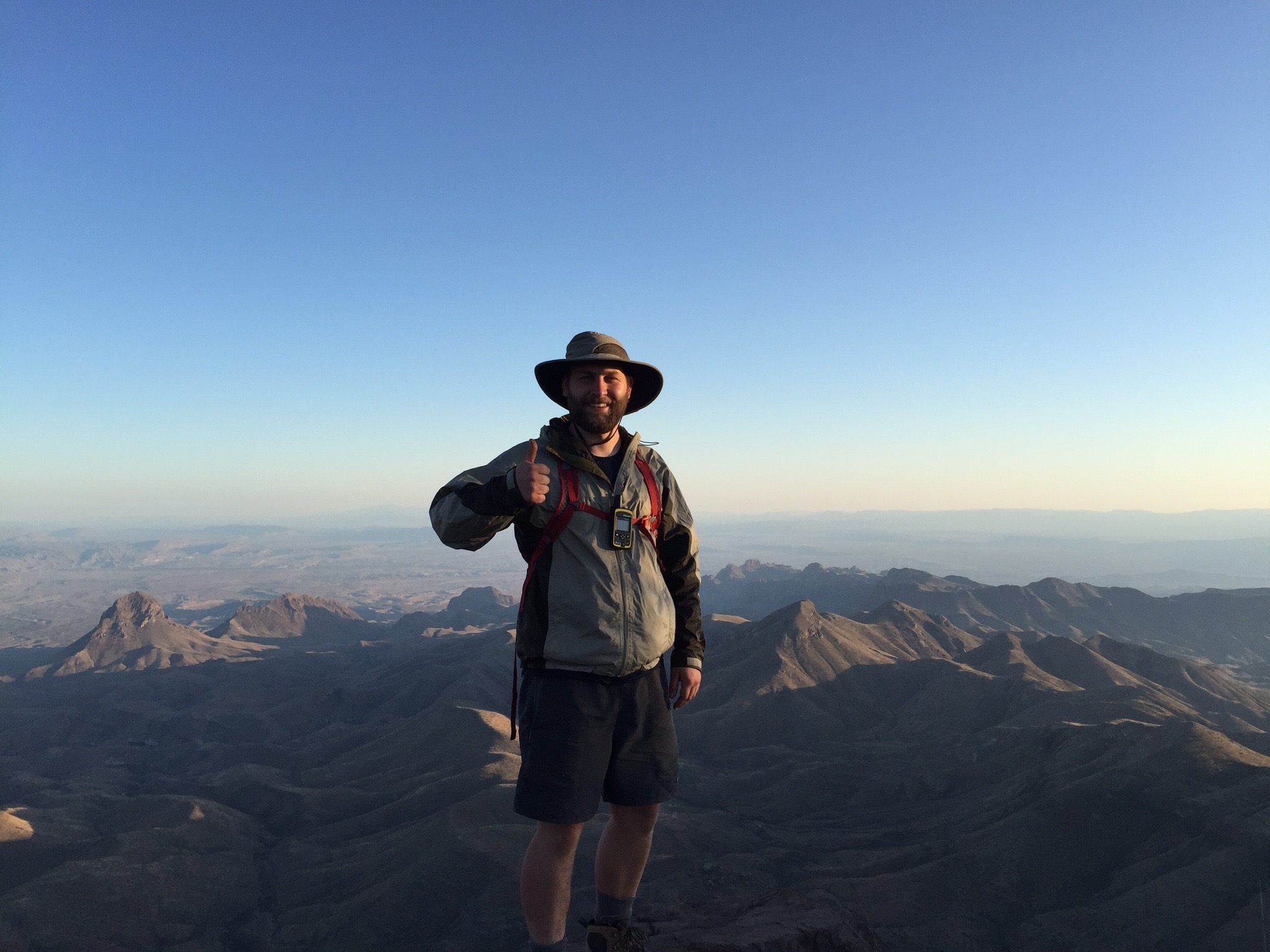 Seriously, the rim is incredible. By this point it was Sunday afternoon. I don’t think there were many people left in the park, let alone all the way out on the rim. When we weren’t talking and the wind stopped, it was completely silent. No sound. Nothing. 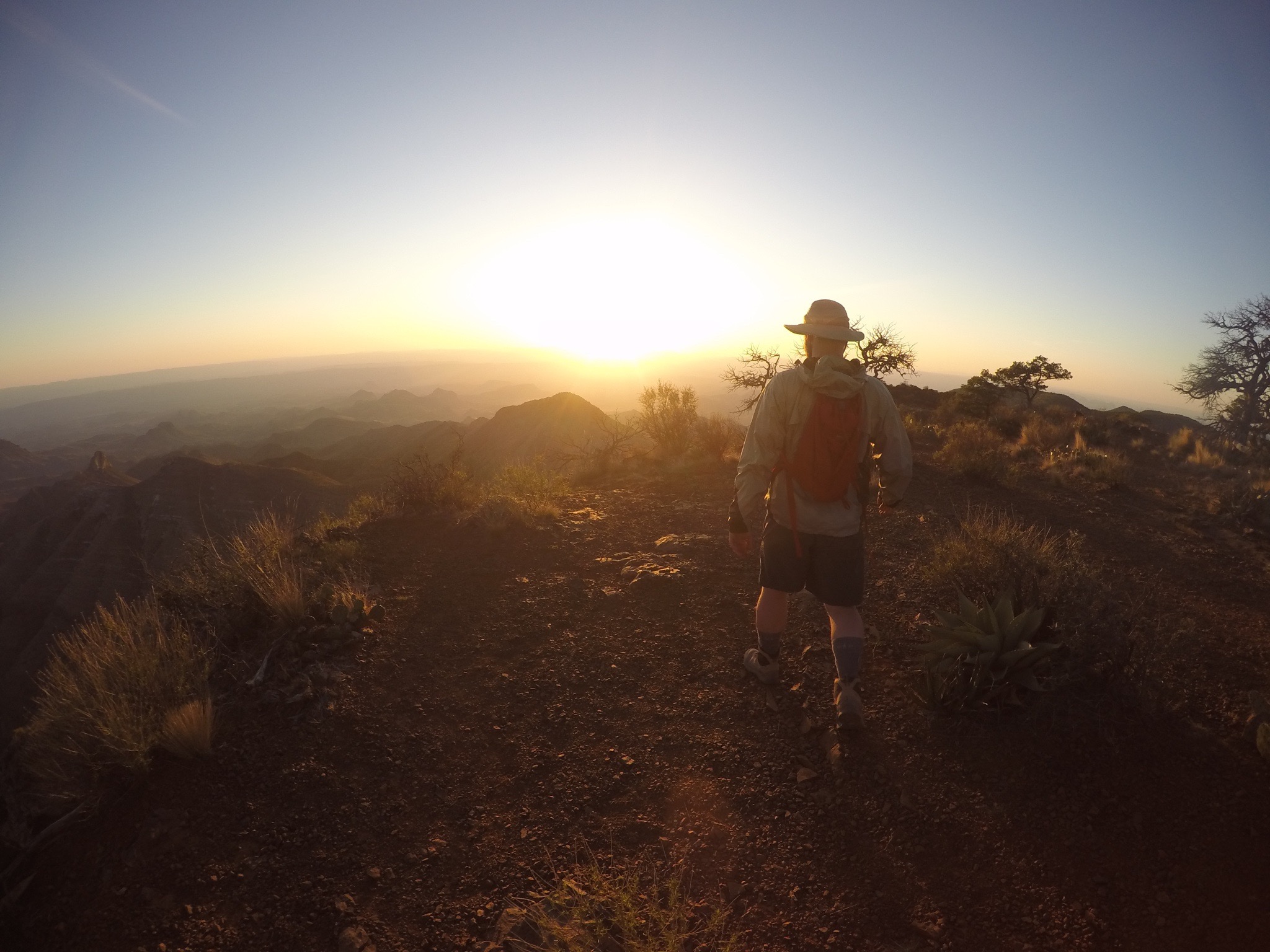 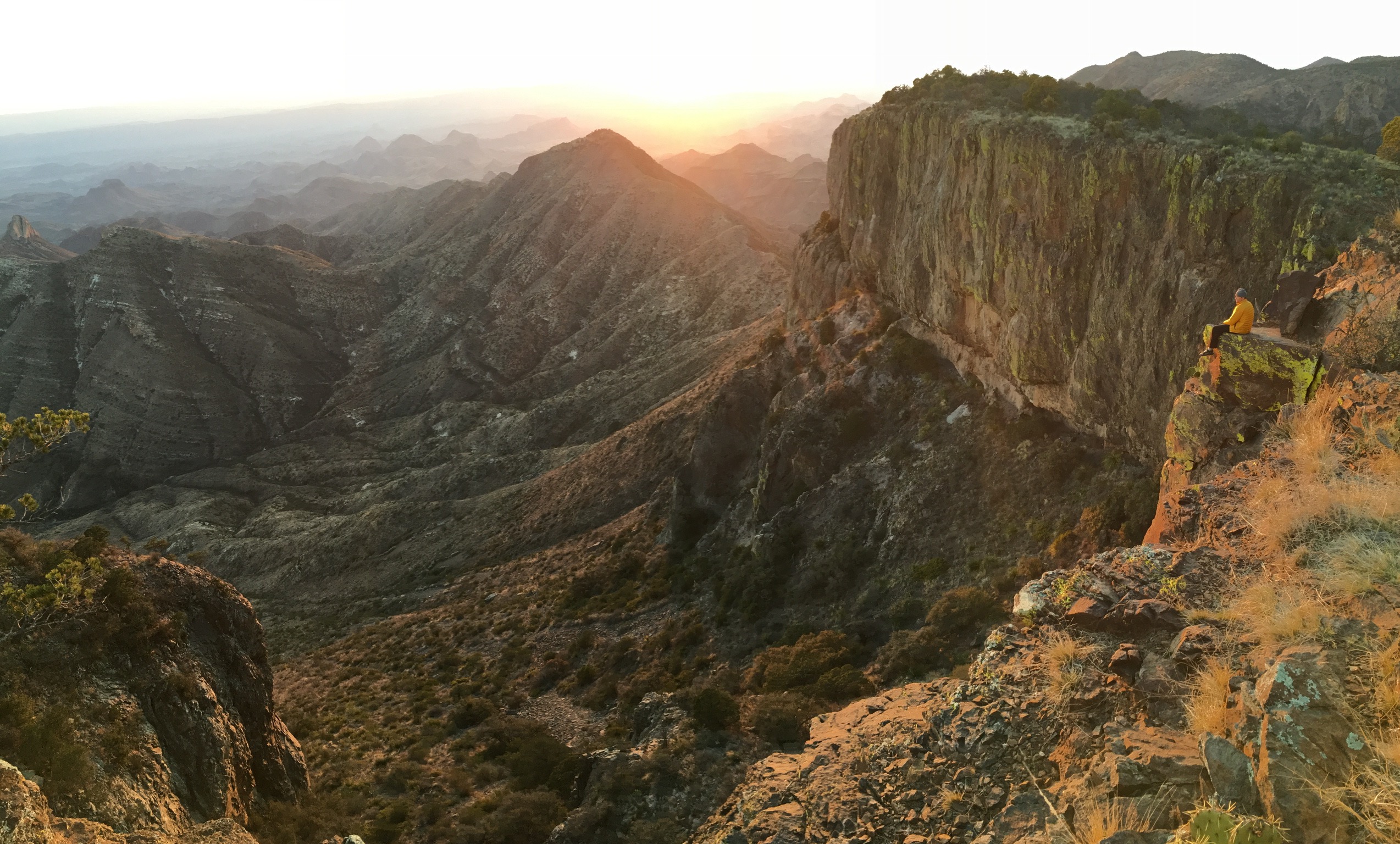 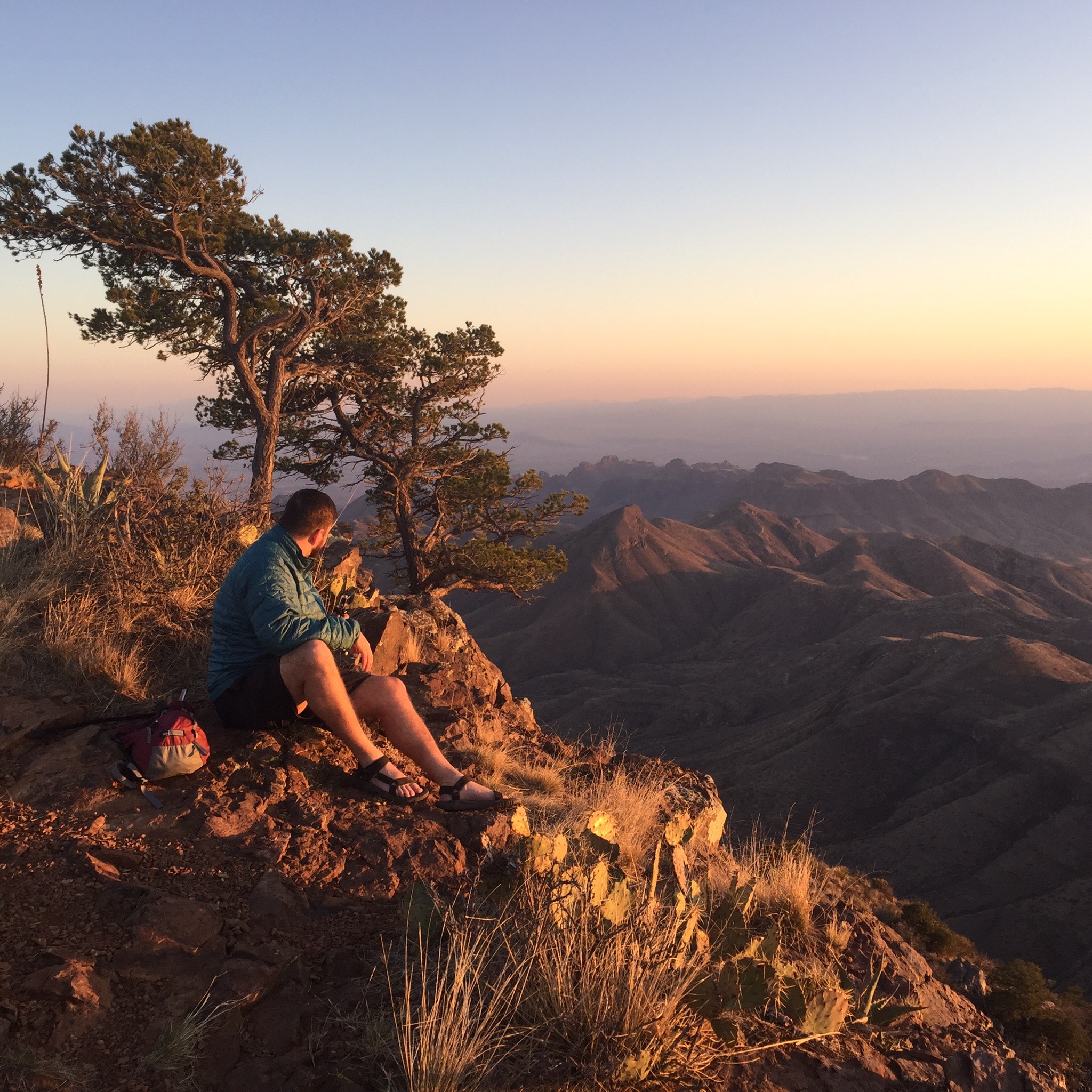 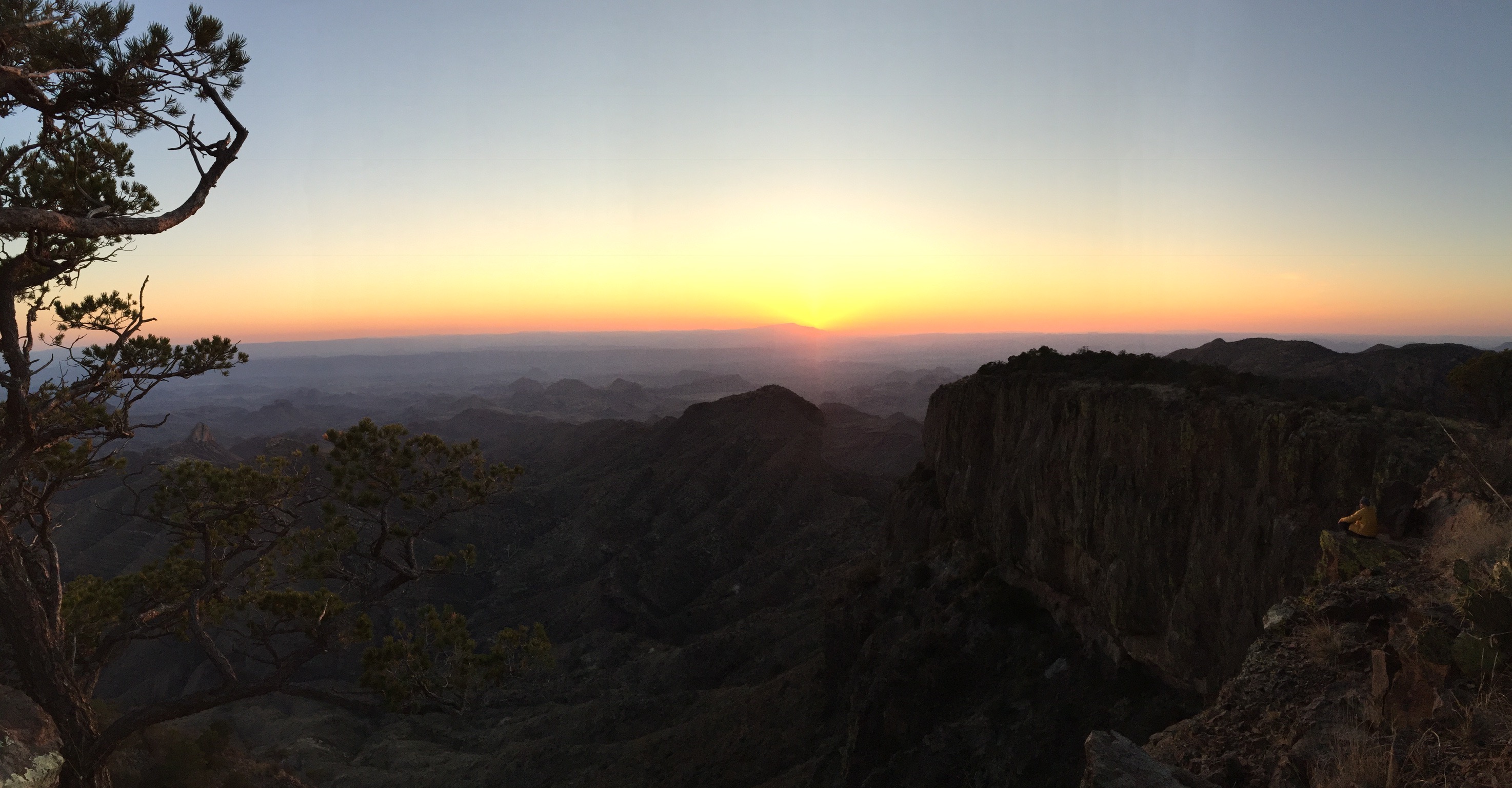 We once again stayed out till the sun was gone, the moon was high and the stars were out. And once again, the hike back did not require added light. Once back at camp, we wasted no time settling into the tent and getting to bed.

Early to rise - the alarm went off at 5:30a. We wanted to break camp and hit the trail before sunrise to get to the car as soon as possible. Both Chris and Tyler planned to be at work early the next day. We didn’t want to get a late start on our long car ride. But as we were about to hit the trail, we noticed the nearly full moon about to set over… the South Rim. We dropped our packs and quietly sipped our coffee as we watched this new-to-us-concept of a moon-set behind the desert mountains.

After the weekend we’d had, there wasn’t much worth stopping for on the hike out, but we did snag a few pictures; including one where I was unaware that Tyler was trying to hold my hand. 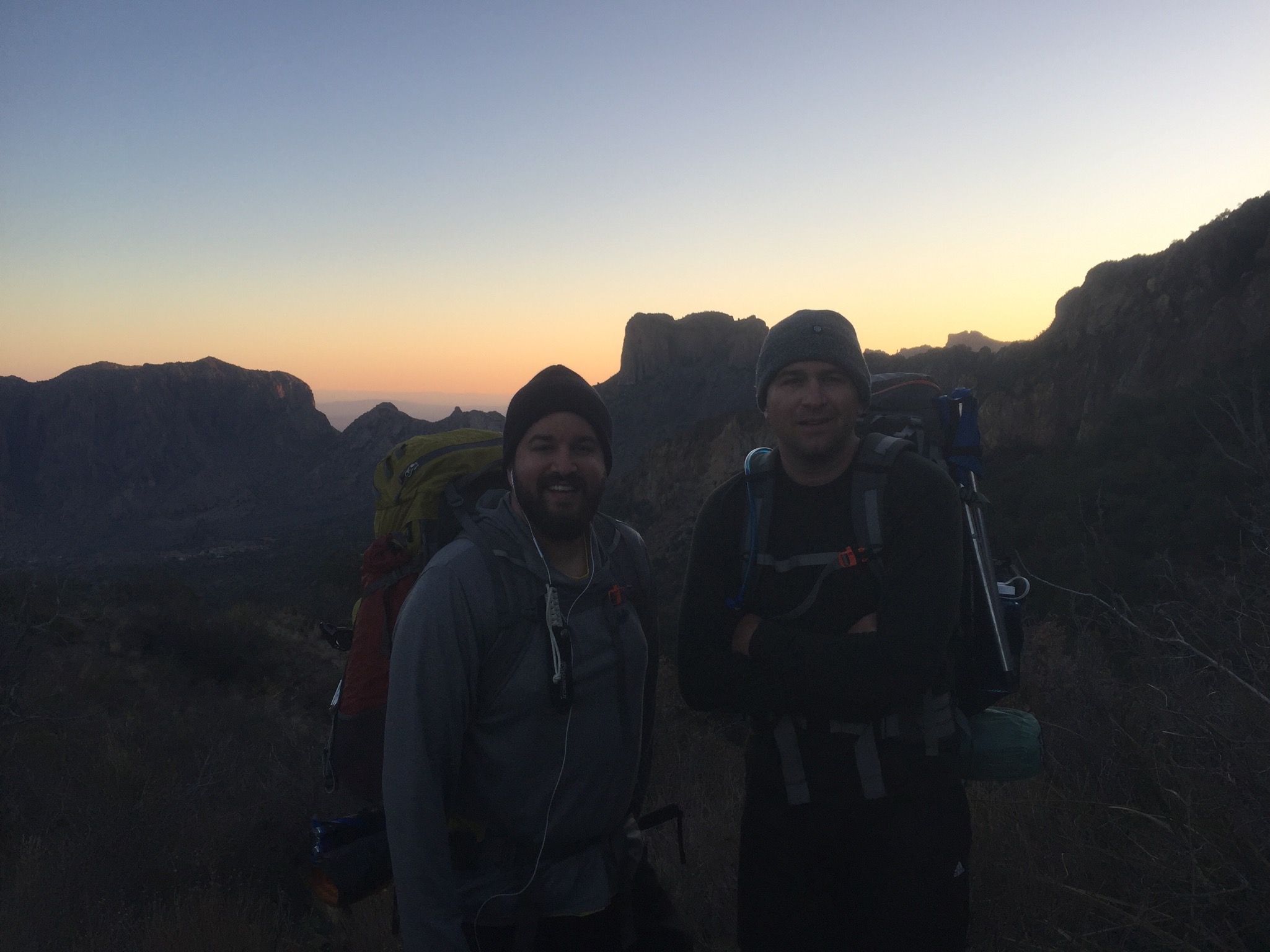 Once back at the car, we changed into some fresh clothes. This did not prevent the car ride back from being a little funky, though. On the drive out of Big Bend, we saw a mountain lion cross the road about 3/4 of a mile in front of us. Funk and mountain lion aside, we made it home safely after an unforgettable adventure. 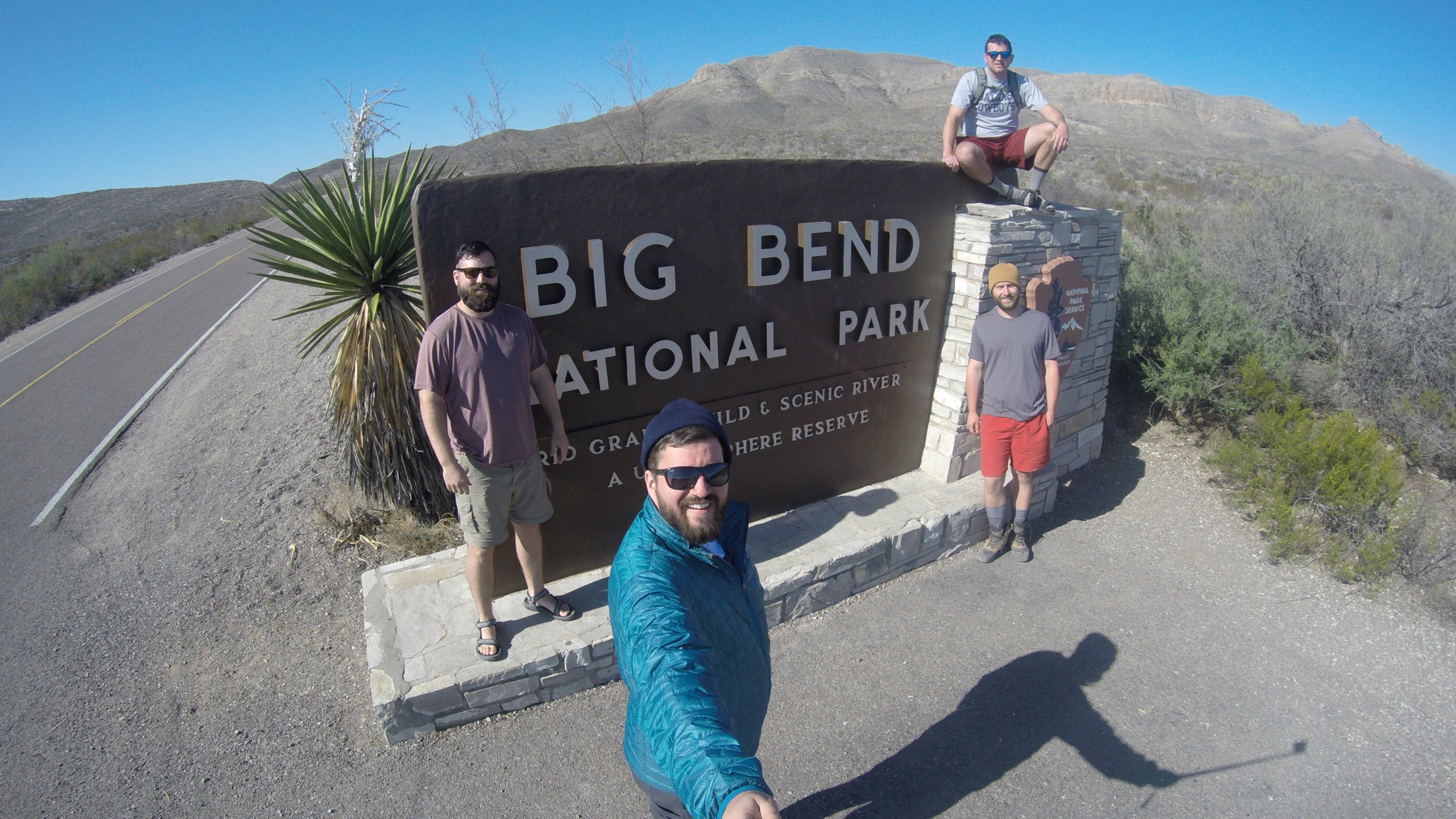 In case it isn’t obvious, I highly recommend Big Bend - particularly the Chisos Mountains. Temperatures can vary widley, so plan accordingly. I wasn’t sure if I needed my warm clothes when I packed them, but I am very glad I had them. I was also very glad I had my Tevas. It was nice to be able to change out of my boots even if the hikes weren’t very long. If you visit, try to hit both Emory Peak and the South Rim - at sunset if you can. If you don’t have a bright moon, the climb/hike down EP could be a little dicey, though. Heed the warning on any dehydrated meals to remove the oxygen absorber before adding the hot water. Come with a flexible plan, site availablity is unpredictable. Don’t bother bringing your hammock, they are outlawed in the Chisos Mountains. Know that the bear boxes were not rodent proof for us. Though even after careful inspection, we we have no idea how the box was breached. Enjoy the beautiful desert.